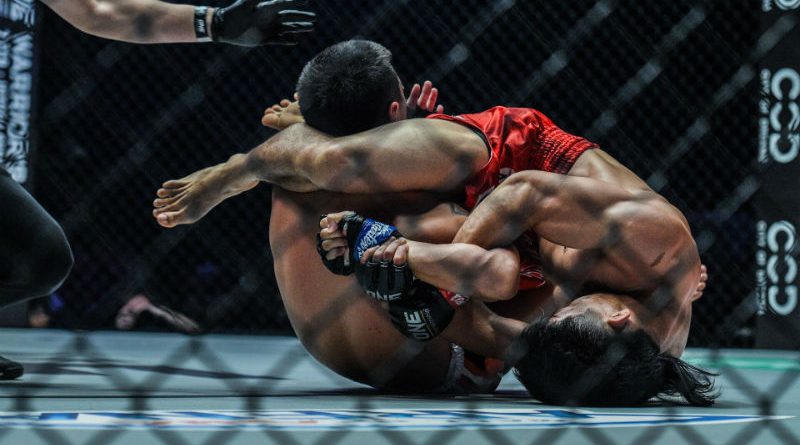 The “Thunder Kid” displayed superb analytics of fight situations and added another explosive victory to his credentials during ONE: Fire & Fury on January 31, 2020 at the Mall of Asia Arena that further validated his being a contender in the strawweight division.

Lito Adiwang was not in smiling, friendly mood when he faced Thailand’s Pongsiri “The Smiling Assassin” Mitsatit while gunning for his seventh straight win.

He said pre-fight that he wanted to size up his opponent in the early goings and look to end the fight without going the distance.

He quickly went to work upon hearing the bell and looked for the openings to finish the match as he promised.

Adiwang connected a thunderous flying kick that momentarily stunned Mitsatit and followed it up with hard combinations to the face to that sent his to his knees.

He then took advantage of his opponent’s disorientation to get superior ground position and unloaded the ground and pound using his fists and elbows.

The hits couldn’t supply the knockout win, however, as Mitsatit has enough left in the tank to kick himself out of trouble using the cage’s fencing, survive the vicious attack and take the action back to their feet.

In another surprise move from a Team Lakay fighter, Adiwing then went for Mitsatit’s leg that resulted into the fighters locking into a clinch.

Adiwang flipped his rival to his side for the takedown and again takes side control of the ground action.

The opening gave Adiwang another attempt for an early finish as he tries to end the fight with his a Kimura choke.

Mitsatit managed to get out of the second extremely difficult position he was in by forcing the action back to their feet and even got to Adiwang’s back.

Adiwang, however, saw an opportunity as he refuses to let go of his Kimura grip on Mitsatit’s arm, even when he was absorbing knees to his leg.

In another surprising move that showed his great IQ on fight situations, the “Thunder Kid” willingly gave up his back in a ground game just to avoid the knees and retain his grip.

His gamble turned out to be a winner as his refusal to let go of the Kimura grip paid big dividends!

He steps over Mitsatit’s head in the jockey to get the finishing spot, locks the grip into position and started cranking his rival’s arm until the Thai signaled the tap and the referee intervened to stop the match.

The move, one of the event’s best highlights, impressed the commentators that they compared it to Joshua Pacio’s, insinuating he might have learned the move from Pacio himself.

Adiwang advanced his MMA record to 11-2 while dropping Mitsatit’s to 10-5.

It is Adiwang’s fifth straight win in ONE, three in the Warrior Series and two as a regular campaigner.

The uncommon Kimura submission is turning out to be a pivotal weapon in Adiwang’s arsenal as this instance is already the third of its kind in his career.

When asked about it, Adiwang confirmed to Herald Express that he is indeed looking to execute a Kimura in his fights. “Ever since, one of my favorite submissions is Kimura”, he said.

In comparison, Pacio’s version of the creative submission move, named “The Passion Lock” by Pacio himself, accounts for just one victory in Pacio’s career, occurring only when he executed it for the first time before ONE Championship audience on July 27, 2018.

Ironically, the submission also happened inside the MOA and the victim was also Mitsatit.

Adiwang, however, said his opponent did not influence his execution of the move and that Mitsatit suffered an almost similar fate because an opening for the Kimura submission presented itself.

“[While] the Kimura is one of my favorite moves, I entered the fight prepared in all areas. I’m ready to snap any kind of submission depending on the position I’m in. It just so happened that I’m in a position where I can lock up that kimura on Misatit.”, he continued.

Adiwang’s explosive victories is starting to make noise in a division that is currently ruled by Pacio which makes fans wonder whether his meteoric rise requires a match between the “Thunder Kid” and “The Passion” inevitable as what happened with Pacio and Rene Catalan last year.

Adiwang, however, was quick to pour water on the salivating match happening soon and emphasized that there are many more challenges for the pair to conquer in the division before even reaching that point.

“It’s better if we first focus on these challenges. Our present status could vanish if Joshua and I think too much about the future. Let the future decide if the match will happen but until then, let us deal with what the present has in store for us.” he ended.

If Adiwang keeps this streak going and Pacio continues to thwart his challengers, Team Lakay could really, really have a nice grip of the ONE strawweight division for a considerable period of time.