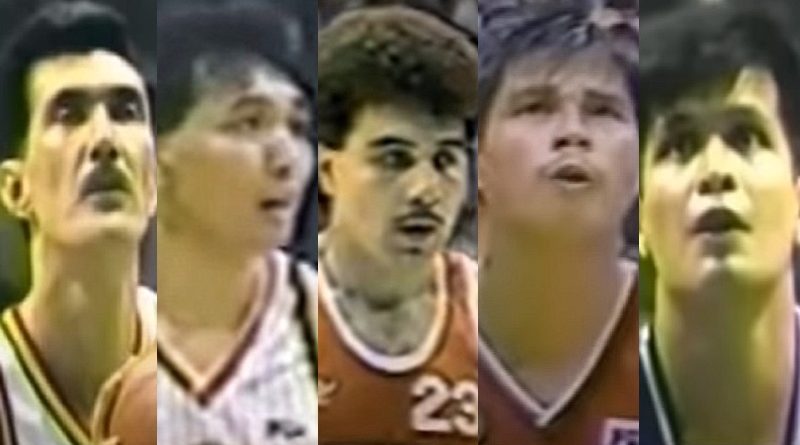 The fantasy team I’d like to form this week consists of a five that could outscore any other combination in PBA history.

As usual, rules are all PBA players in their primes at my disposal and realistic assumptions are to be in place. Putting in just five scorers in the team wouldn’t work. We have to put in guys who can play their positions and make the team competitive.

This week’s theme is forming a team that will beat the opposition by ramping up the game score up. This is premise on how this team is built.

“El Presidente” is the most versatile center the league has ever seen because of the various skill sets in his arsenal, including the patented “elegant shot” and being the best passing big man ever.

His only weakness is the ability to extent the defense by lacking a reliable three point shot which should limit him from playing a guard or small forward position in today’s game. During the illegal defense era, he could play all five positions.

Fernandez made only 24 treys during his career. I’m quite sure, though, that he could have developed a decent three point shot if his era demands centers to have one.

His abilities to score in various ways and set his teammates for open shots are primarily why I want him on this team. This will allow his teammates to position themselves for an open spot whenever he has the ball instead of looking to get it.

Fernandez could also put the points in the book himself as he leads the league in total points with 18,996, averaging 17.7 a game. He is second in assists with 5220 and offensive rebounds with 2,217.

The only reason why I hesitated to insert “The Triggerman” in my all-time first five is his lack of defensive and all-around game which I preferred that team to specialize in.

But if it’s offense we’re talking about, he would be among the first considerations for which this team is built around.

This man still holds the PBA record for highest single game score when he recorded 79 against Ginebra. He also recorded 68 (3rd highest all-time), 57, and 50 in other separate occasions.

Caidic has proven to be an elite player during the illegal defense era, he should be even more than that in today’s game given the extensive use of the three point shot and the zone defense.

“The Quick Brown Fox” is the best scoring point guard the league has ever seen. He is also among the best ball distributors as well.

Brown is the epitome of offense from this position, scoring 7,851 points in a very short PBA career consisting of only 340 games. To date, he still holds the best scoring average for locals with his 23.1. He once scored 57 and 52 points in separate occasions. He converted 291 treys during his career.

At the same time, he manages to spot the open man every game more than any other player in league history. To date, he still holds the best assist per game average in a career with his 7.3.

He’s undoubtedly proven that if its points the team wants from this position, its points the team’s gonna get. It doesn’t hurt either that he gets his points in different spots from the floor and with great efficiency. He also has the knack to give himself opportunities to get to the foul throw line.

For the last two positions, I would want two options who can play the post and get either easy baskets or go to the line in one-on-one opportunities.

In addition, these two should be complete scorers, meaning they can score in various ranges in a variety of ways. This would allow the team to be able to play under both the illegal defense rule setup and today’s style. They will give the team scoring flexibility and can still spread the floor at the same time.

I couldn’t think of any better options than these two super one-on-one specialists who can extend their shots from the outside.

Both know how to play with the basket behind their back, exploit one-on-one mismatches, are very efficient free-throw shooters and can sink the three point shot.

The “Fourth Quarter Man” is one of the superstars who has complete offensive package in their arsenal as shown by his 12,008 career points, 7th in the all-time list. He is probably the best at getting to the line as evidenced by 3,133 free throw points, a stunning 26% of his total score.

On the other hand, many would argue that “The Captain” has the best masterful post moves in league history. Most of his 15,091 points (3rd overall) came from the post and 3,640 came from the line (24.12%).  He also developed a reliable three point shot during the later part of his playing career.

This team can obviously score a lot in the illegal defense era.

So, I’d like the relievers to pack more firepower from the outside in order to enhance the range of the team for today’s style.

When fielded in replacing Lastimosa and Fernandez, respectively, and Brown moving to the two guard spot, the team now becomes quicker and perfect to employ the outside shot oriented offense.

Take your poison, both shooting guards can light it up. I’ll just shut up and let their PBA scoring stats speak for themselves:

Harris:  Famous for scoring the PBA all-time high of 105 points and scoring more than 60 in 14 other times. He averaged 60.7 a game during his first stint. He also owns the third best single game score at 98 while scoring 87, and 82 in other separate occasions.

He was the 1992 Third Conference Best Import, leading the Swift Mighty Meaty franchise to the championship that year. He is better suited for isolation and open court sets.

Briggs: owns the highest scoring clip in PBA history at 62.1 point per game. His highest single game score is 87, tied for 4th best in PBA history. He also scored 81, 78, 77, 75, 71 in other occasions during the 1989 Third Conference, his only PBA stint. He would be a better option from the perimeter and long range.

He did won the Best Import award but failed to lift Ginebra to the championship, losing to Fernandez and Brown’s San Miguel team who bagged the grand slam that year.

Here’s a fantasy challenge: Who will win between the lockdown team and this one? The match-ups: Fernandez vs. Jerry Codiñera, Patrimonio vs Marc Pingris, Caidic vs Chris Jackson, Lastimosa vs Gabe Norwood, and Brown vs Glen Capacio.

I could see the defensive team stopping the offensive team in some instances but this shootout team’s firepower is simply too much to contain in a long series.