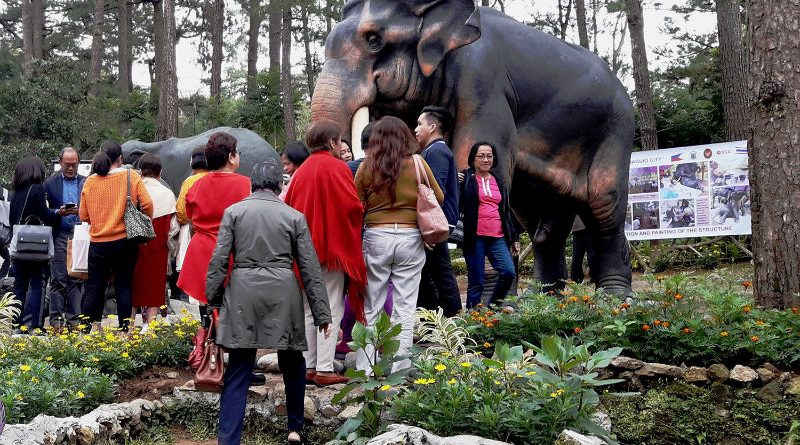 BAGUIO CITY  – Mayor Mauricio G. Domogan ordered the concerned offices of the city government to work out the enclosure of the area where the life-size elephant sculptures was erected to make sure that people will not vandalize the donation of the Thailand embassy to the city.

The local chief executive said that while the area has not yet been fenced, visitors wanting to have their photographs taken with the life-size elephant sculptures must observe proper discipline by not vandalizing the family of elephants and ot to unscrupulously throw their garbage in any part of the Botanical Garden.

Last December 18, 2017, Thailand Ambassador to the Philippines Tanathip Upatising formally turned over to Mayor Mauricio G. Domogan and the local government the life-size family of elephant sculpture constructed by the Thai government and its partner, Siam Cement Group (SCG), in a portion of the Botanical Garden which is now one of the major tourist attractions in the city’s premier park.

“We call on visitors not to vandalize the sculpture to preserve it as a major attraction in the park. We must observe utmost discipline when visiting our parks so we will contribute to efforts in showcasing various attractions in the city,” Domogan stressed.

While awaiting fencing, Domogan directed the personnel of the City Environment and Parks Management Office (CEPMO) and the security guards assigned in the area to make sure that the sculpture will not be vandalized and subject to other forms of destructive activities that will affect the status of the donation and to make sure that those vandalizing the various attractions in the park will be apprehended and penalized pursuant to existing ordinances of the city.

The Thailand embassy and SCG started working on the life-size family of elephant sculpture last September in time for the completion and eventual inauguration of the project over two weeks ago contributing in enticing residents and tourists alike to visit the Botanical Garden area and have their photographs taken with the sculpture.

Domogan underscored that the local government is networking with various individuals, companies and foreign governments for the beautification of the city’s premier destinations to sustain visitors to the city as one of the country’s preferred tourist destinations and vadalizing such donations will affect the state of the city’s parks, thus, the need for residents and visitors alike to be vigilant on the activities of vandals and report these to the park personnel and law enforcers for proper response.

He underscored that people visit the city’s premier destinations to enjoy the beauty and scenery in the said places, thus, they should not be deprived of the right to do so by vandals, thus, the need for appropriate penalties for such illegal acts.