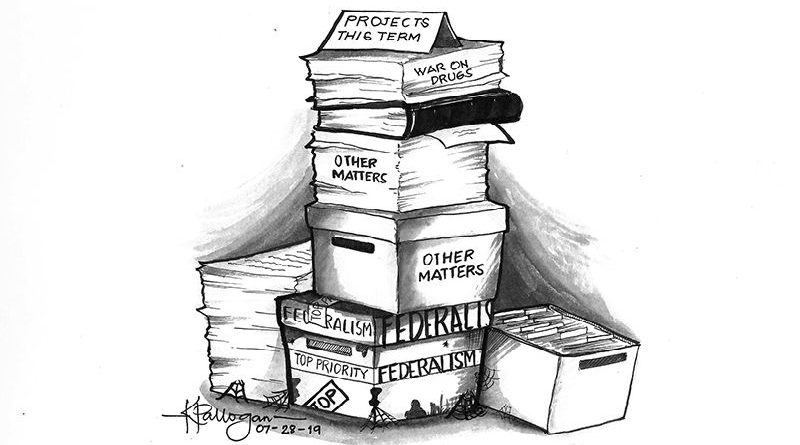 At the start of his term, President Rodrigo R. Duterte underscored that one of the priority programs of his administration will be the shift in the form of government from the present unitary to federal. It was a campaign promise that has not yet been fulfilled or has gained headway primarily because of the absence of a sufficient legal basis to push through with the planned shift in the form of government.

The proposal to shift to a decentralised governance system is seen as the solution to an equitable development in the different parts of the country so that not one is left behind. One step done by the present administration towards this end is the crafting of such a federal Constitution they called the Bayanihan Constitution. This was the done by the Constitutional Committee (ConCom) created by the Chief Executive to make the recommendations on what should be amended in the 1987 Constitution that will make this shift possible.

Ironically, the House of Representatives did not act on this draft that was submitted to them by President Duterte for the possible implementation of the charter change but the House instead, came out with Resolution of Both Houses No. 15 that deleted some important provisions of the 1987 Constitution, specifically the establishment of the autonomous regions in the Cordillera and Muslim Mindanao and the unlimited term for local officials. The House did not succeed in its bid to pursue the desired charter change after the same was overtaken by events.

The issue here is which comes first, the shift in in the form of government or the Charter change? Since the form of government is defined in the Constitution, obviously, the organic law must be first amended to change the form of government to a federal form. Thus, currently, there is no constitutional and legal basis to make this shift. Incidentally, both chambers of Congress see the path to this change differently, The lower House wants to take the shorter route through a constituent assembly or the convening of both chambers to work out the amendment to the constitution,  while the Senate wants the charter change to be done through the preferred Constitutional Convention where the delegates will have to be elected by the people from the different legislative districts.

In his recent State of the Nation Address (SONA), the President did not mention anything on shifting to a federal form of government. However, during the President’s meeting with local chief executives from all over the country, he again raised the issue on federalism with marching orders to the concerned government agencies for the aggressive campaign to work out the shift to federalism.

Even federalism advocates admit there seems to be no room for federalism to succeed in the administration’s remaining three years because of the lack of support from the grassroots level. This is to remind them we must have a concrete legal basis to pursue federalism as this will surely be subjected to a legal question once the administration insists on changing the form of government.

Federalism cannot be rammed down the throats of our people. We cannot get their support if we insist on myopic assessments, self-serving ends and ungrounded goals. Any form of government has its advantages and disadvantages but federalism should not be used to probably extend the term of the present batch of leaders.

Let us not rush federalism because even the advocates in the shift to federal form of government do not have the legal personality and basis to pursue the same. Further, concerned government agencies previously tasked with the information and education campaign on federalism do not even know how the country will be divided into federal states which is an important aspect of federalism. Even some politicians who continue to advocate for federalism do not actually know what they are talking about, thus, we advise them to fully understand what is federalism in all its forms and what would be the implications to the country, from the contentious groupings of provinces into states, to the practical side of structuring the bureaucracy and resourcing this.

What is clear to us is federalism is already out of the President’s radar that is why let us forget federalism and start thinking of ways on how to convince the national government to administratively devolve powers and resources to the local governments because they know their needs but they lack the resources to do so.

There is still a long way to go before we can convince our people to understand the real essence of federalism. What we should do now is to instead work for the development of the remote communities of the country whether there is federalism or not.