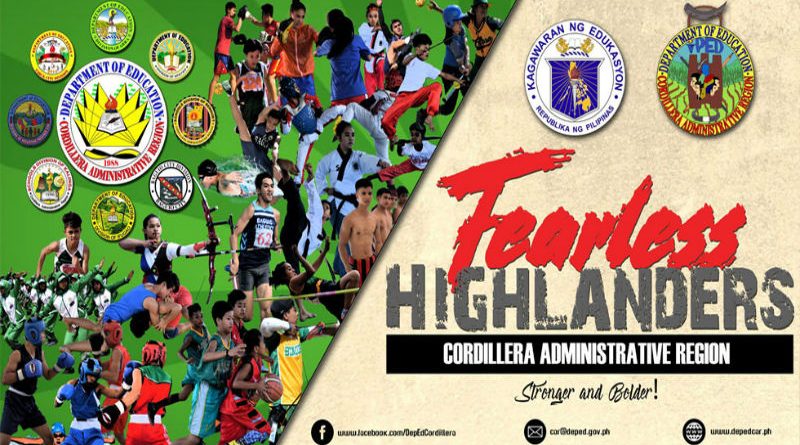 The Cordillera Administrative Region (CAR) settled for fifth place in the 2018 Palarong Pambansa, a one rank improvement from their rankings last year, although their gold haul was one less than their previous.

CAR amassed a total of 25 golds, 22 silvers and 23 bronzes to trail the National Capital Region (NCR), Calabarzon, Western Visayas and Central Visayas. It was a one rank improvement from their sixth place finish last year when they took home a 26-21-21 haul.

Northern Mindanao, Soccsksargen, Central Luzon, Davao, and Cagayan Valley round up the top ten in the overall standings

NCR again dominated the competition, reacing the century mark in golds won way ahead of Calabarzon’s 55.

CAR’s secondary division accounted for18-18-18 while the elementary division contributed 7-4-5.

As expected, the Baguio City delegation heavily accounted for CAR’s medals. The Summer Capital of the Philippines athletes appeared 87 times in the podium. Benguet appeared six times, four times for Ifugao, three for Mountain Province, and one each for Apayao and Kalinga.

Charmaine Angela C. Villamor bagged the most number of medals, contributing 2 golds, 3 silvers, and a bronze in archery, while elementary division’s Aesha Kiara B. Oglayon and Joshua Aaron E. Erece pocketed the most golds with three each, along with a bronze, for Taekwondo.

Also prominently contributing to the medal tally of CAR are secondary division’s Bea B. Mendoza for chess and Jesus M. Macalanda for Arnis, both contributing two golds, a silver and a bronze.