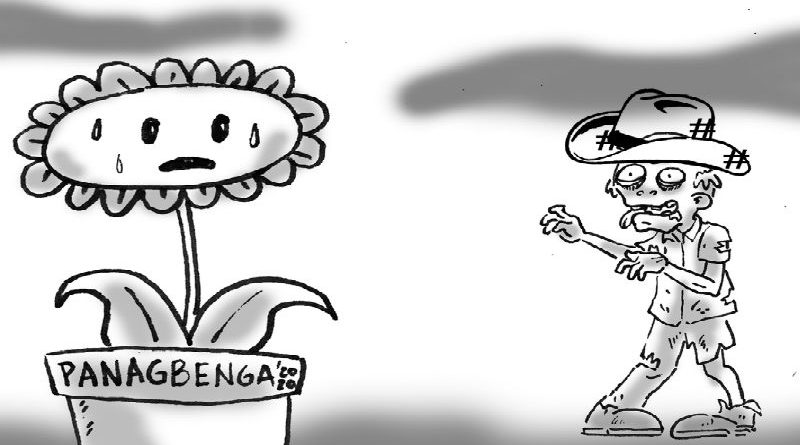 In 1995, lawyer Damaso Bangaoet, who was then the vice president of the state Bases Conversion and Development Authority (BCDA) and the John Hay Poro Point Development Corporation (JPDC), convened concerned stakeholders, particularly those involved in the local tourism industry, to look into the possibility of organizing  crowd-drawing events that can be either spearheaded by the government or the private sector, or through a partnership, to entice visitors to make Baguio City their must-see tourist destination, especially during the lean tourism months. The lean tourism months then was from June to late October which coincided with the rainy season   making  it difficult to travel to and stay in the city, especially as the road then was the longer route of  MacArthur highway. The group saw the potential of promoting the flowers actually grown in some parts of the city but most of which are produced in the nearby towns of Benguet. Indeed, the group decided to hold the festival of flowers in the month of February as the said month is the right time when flowers start to bloom, and it is the month of hearts and Valentines’ Day is celebrated with flowers.

Former Mayor Mauricio G. Domogan, who was a member of the small group conceptualizing the initial staging of the city’s flower festival, suggested that the name of the aforesaid festival should be ‘Panagbenga,’ a Kankanaey term for the blossoming of flowers, just the right reference for the festival which would be conducted during the month when flowers start to bloom. The initial staging of the flower festival was for a week with only a few participants to the streetdancing and float competitions scheduled for the said annual event. Further, the famous market encounter and the landscaping competition was held within the compound of Camp John Hay with few residents and visitors given the chance to see the world class landscaping presentations of local landscapers. Subsequently, the Baguio Flower Festival Foundation, Inc. (BFFFI) was organized composed of representatives from both the government and the private sector in line with the objective of organising the festival as a government-led and private sector supported endeavour. The management and operation of the festival showed a balance between the government and the private sector.

Ironically, the annual staging of the festival suffered a setback in 2005 when two organisations squabbled to handle the conduct of the flower festival, particularly the two major events, the grand streetdancing parade and the grand float parade, that nearly caused the festival’s eventual dissolution.

The city government eventually decided to return the management of the festival to the foundation which nurtured the same until it flourished to become one of the famous festivals worldwide. The Panagbenga also earned the distinction of being the only festival in the country included in the elite list of the International Festivals and Events Association, thanks to the BFFFI and the previous administration for working hard to achieve such milestone in the history of the flower festival. For this year’s 25th edition of the Panagbenga, the city government decided to take the back seat and allow the BFFFI to solely handle the events lined up for the milestone staging of the flower festival. The city will no longer be providing the annual P4 million subsidy it had been appropriating in its annual budget specifically for the prizes of the winners of the different competitions and the subsidies for streetdancers and landscapers, among others.

We believe the foundation will continue to ably manage the festival well despite the withdrawal of the city’government’s funding and the usual criticisms. It is not the first time for it to receive such negativities but all the activities will push through as planned. The outcome of this year’s milestone edition of the festival will surely chart the future of the festival. Surely, critics wish the failure of this year’s edition of the signature event of Baguio but the foundation will weather this. What is to be monitored is that the flower festival will not be turned into a money-making endeavour. On the other hand, there are positive-inclined individuals and groups wishing for the successful conduct of the festival as it has placed Baguio city in the tourism map over the past several decades. The annual conduct of the Panagbenga played a key role in improving the image of Baguio city from the perspective of local and foreign visitors.

Now that Panagbenga has made wonders for Baguio city, kudos is given to the overwhelming support of the people, the cooperating children and youth performers through their schools, other participating groups, the tourists and the organisers, as well as the individual and corporate sponsors of the activities. There had been negative allegations hurled against the BFFFI in the conduct of the previous festivals but that is part of the challenges that the foundation chews as energy for its success. Let us work for the festival’s sustainable and resounding success because Baguio people own the festival.

12       12SharesThis post has already been read 433 times!The ongoing negotiations between the members of the city’s Public Private Partnership for