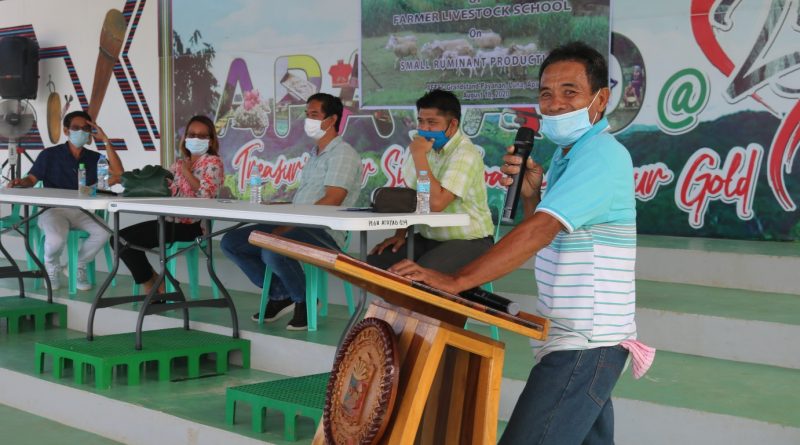 In line with the recent pronouncement of Governor Eleanor C. Bulut-Begtang concerning the crucial roles of Iapayao farmers in attaining self-sufficiency through agriculture-farming and animal-raising, the Provincial Government of Apayao thru its Provincial Veterinary Office launched the 6th “Farmer Livestock School on small ruminant production” last August 18.

After months of delay due to the COVID-19 pandemic, the formal opening of this year’s FLS finally pushed through at the Apayao Tourism and Sports Complex, with the Governor and Vice Gov. Remy Albano gracing the occasion participated in by 40 farmers from Apayao’s seven municipalities.

Gov. Leah assured the participants that the Provincial Government shall continue to support the said program that started in 2015 under the administration of then Governor and now Congressman Elias C. Bulut, Jr., as this directly benefit the farmers. The Governor said the program shall be expanded to play a bigger role in boosting the recovery of the province’s economy amid the virus pandemic.

“In our fight against COVID-19, the program is indeed a timely intervention as it strengthens the existing livelihoods of our people, so as long as you are serious in this endeavor, we will support you,” she stressed. On his part, Provincial Agrarian Reform Officer Artemio Dumaoang signified the interest and plan of his office to invest and allot funds corresponding to the current program of the Provincial Government with regard to goat-raising to qualified beneficiaries.

“I’m glad that you pursue this kind of endeavor. I hope you become public speakers in the future, convincing others that there’s life in raising animals. Personally, I am inspired and we shall use and share this strategy to others,” Dumaoang added.

Dr. Verzon thanked the Governor for her relentless support to his office particularly in small ruminant production. He also encouraged the participants to show industry and passion. He has high hope that this program shall expand further and benefit more Iapayaos.

“Truly, if you only have industry and passion in this work, you will succeed. It is my aim that in the future through the strong backing of the provincial government along with the National Line Agencies like DAR, the Province of Apayao shall be the sheep capital of the north,” Dr. Verzon underscored.

Also during launching, some successful graduates of the SLF’s previous batches took turns in sharing their experiences as a matter of inspiring the farmer-participants. “Inan-anusak kakabsat iti nagtungpal kadi insursuro da ditoy (I patiently followed what they taught me here). Adu ti napadasak nga rigat ngem haanak nga simmuko inggana nga adda met lang pagbanbanagan nan ti panag-tartaraken so agymanak unay apo ti suporta yo kanyami (I experienced a lot of hardship but I did not surrender until it brought good result as I attend my animals, so thank you very much for all your supports),” successful 2018 FLS graduate Romel Credo said.

This seven-month schooling shall be held once every week. Classes start in Kabugao on August 26 and on the 27th for lower Apayao. Graduation shall be either be on the last week of March or first week of April 2021. After the schooling, the participants shall be given sheep or other small ruminants as their starting stock.

This post has already been read 630 times!The city is not yet inclined to open inter-regional public transportation to avoid