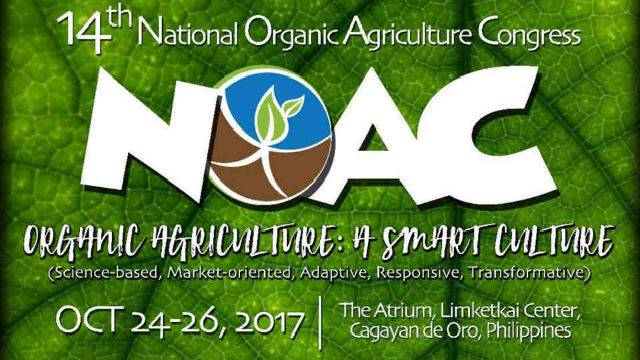 The 14th NOAC advocated for the promotion and support for organic agriculture that is Science-based, Market-oriented, Adaptive, Responsive, and Transformative (SMART). It recognized the efforts and accomplishments of the Local Government Units (LGUs), individual farmers, farming families, farmer’s organizations, agricultural extension workers, and organic agriculture focal persons in this endeavor.

The other participants are organic farming practitioners from all regions of the country, various stakeholders, implementing agencies such as ATI, BAFS, BAI, PhilMECH, BSWM, BPI, AMAS BFAR, and BAR, partner agencies, local government units, and supporters of Organic Agriculture in the Philippines.

In his message, Secretary Piñol expressed the need to implement technology, financing, and marketing in the agriculture sector will improve the productivity of the people and will make sure that farmers and fisher folks will make money out of their efforts and sacrifices.

He also mentioned that the biggest problem in agriculture is financing which the present administration is trying to address by introducing the new program called Production Loan Easy Access (PLEA), allowing farmers to have access credit without collateral and with 6% interest annually. They are also working on a new scheme improving the equipment distribution program where the seeds that the government is giving will be transferred to credit system which will allow farmers to buy their own type of seeds that is appropriate for the type of soil and climate they have.

In the marketing aspect Piñol cited the TienDA, which was launched this year with the purpose of establishing a marketing system where consumers and producers are linked to reduce the price of farm produce while allowing farmers to earn more from their produce. “We will be doing this continuously until we will perfect the system likewise we are promoting the use of local agriculture products,” he stressed.

Piñol challenged the farmers to work on feeding the Filipino people first. “To you organic farmers, let’s talk to our congressmen and see what incentives we can offer to every farmer who embraces organic farming,” he said.