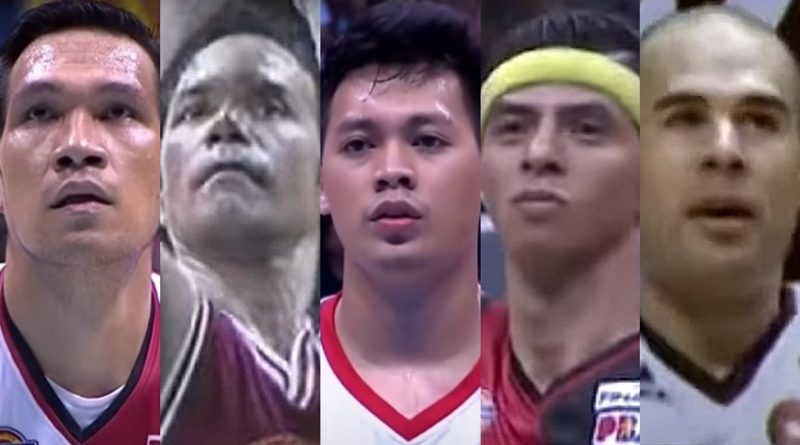 This fantasy team consists of a five that will provide fans the ultimate aerial artistic display than any other combination in PBA history.

As usual, rules are all PBA players in their primes at my disposal and realistic assumptions are to be in place. Putting in just five bigmen in the team wouldn’t work. We have to put in guys who can play their positions and make the team competitive.

Little argument occurs to me who is going this spot. The Kraken’s recovery rate in the small ball era is fascinating, already close to 5,000 rebounds while still in his prime.

If he can register more than 12 a game, around 4.5 from the offensive glass, in today’s game where a number of rebounds are taken away from the shaded lane due to the number of long shots taken, it wouldn’t be far fetch that he can get 20 a game during the illegal defense era where majority of the rebounds normally fell just inches away from the basket.

He just pulled down the highest single game total of 31 rebounds during the 2019 Philippine Cup finals.

Currently, he is on pace to reach the Mount Everest of rebounds in league history, threatening to challenge Ramon Fernandez for defensive and total rebounds and Abet Guidaben for the offensive rebound all-time records.

Let this sink in for a minute, he has missed triple double and double double opportunities in the past because he didn’t score ten points or dished off ten assists as a 6’1” shooting guard.

His supposed duty is to score and occasionally dish off assists, he instead grabs rebounds in display of an intriguing characteristic for his position.

No question, Thompson is what this team needs in this position even with his lack of consistent scoring punch.

The Big J is competing with Thompson for the best rebounding guard the league has ever seen. Although Thompson currently has the edge in per game average, he is still very far from matching Jaworskki in overall glass production.

Jaworski is 8th in total rebounding all-time. He grabbed 5,367 total rebounds during his career, 1781 on the offensive glass and 3586 on the defensive side. That translates to an average of 5.60 rebounds a game.

What’s even more remarkable is these averages were distorted by his playing dwindling minutes during the later part of his career as he turned 40 and 50. He is definitely much, much better than these averages during his peak.

He has shown the ability to put the ball in the basket consistently and his partnership with Thompson in the backcourt will still pack scoring punches when needed.

Santos will be fitting for this position considering he can connect from downtown.

He is 7th in the all-time total rebounds list with 5,435. He averages around 8 a game during his career, making him the best rebounder from this position, although he also doubled at power forward in San Miguel coach Leo Austria’s system.

The 2013 PBA Most Valuable Player would have to make his scoring abilities his calling card for this team because it badly needs it. He showed glimpses of capability min doing this as he averaged over 18 points during his MVP year.

Although standing only 6’3”, the “H-Bomb” can clean the glass at the power forward position like how the undersized Charles Barkley did in the NBA during his heyday.

The 2003 Defensive Player of the Year and two-time All-Defensive Team nominee has a nose for loose ball and missed shots that he made an impact for his team even without being involved in the offense.

“The Rock” would be the other option for the starting duty had Fajardo not been around. He is 4th in the all-time total rebounds list 6,401, which is kind of underachieving in this category considering his size and his stature in the game.

He is still active and trails the much smaller Ramon Fernandez, Abet Guidaben and Jerry Codiñera, who all have 7,000 or more rebounds in their career. He, however, is one of the greatest who recovers the ball ever seen by the league on an average basis as evidenced by his 11 a game average.

“Dynamite” Danny is among the top 50 rebounders of all time with 3,128. He plays the swingman position and is an oversized shooting guard who can be swapped with Thompson in the starting unit if the team needs more scoring,

“The Flying A” might be small but he is not shy from collecting rebounds even amidst giants. He is in the top 50 rebounders of all-time with 3,027, a remarkable average of 4.1 for this 5’7” speedy guard. He would be the perfect guy to man the point if the team would play small ball.

Majority of the teams’ reason for hiring imports are to add ceiling to their team and there are too many of great rebounder imports to single out one here.

So let’s make this selection simple, I want to go for the import who set the highest single game record for rebounds, Michael Hackett with 45. How about that?