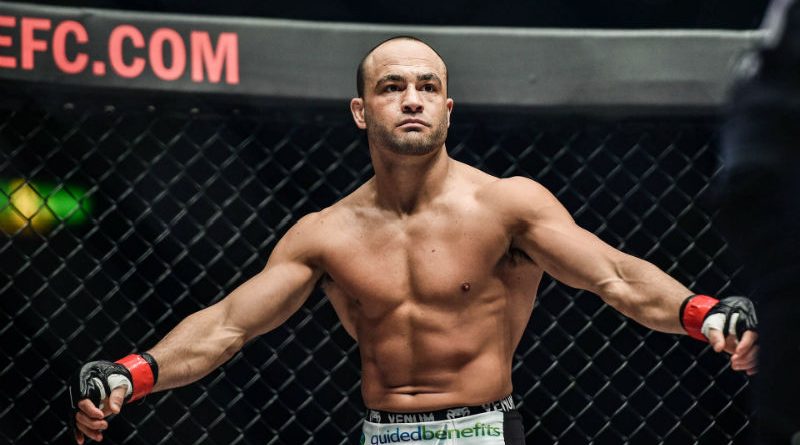 Eduard Folayang is set to get a chance add a different glitter to his legendary career when ONE Championship booked him to face former UFC and Bellator champion Eddie Alvarez at ONE: Dawn of Heroes on August 2, a Friday, at the Mall of Asia Arena.

Folayang and Alvarez, both coming off disappointing, abbreviated losses in Tokyo, Japan last March 31, will square off in a lightweight MMA bout that will decide who’s going to return for contention of the ONE lightweight title and who’s going to sink into a losing streak.

Folayang yielded his lightweight title to Shinya Aoki in the rematch bout at ONE: New Era. He was stopped by an arm triangle choke that literally put him to sleep in the first round.

Earlier that night, Alvarez was kayoed by strikes also in the first round from Timofey Nastyukhin during the ONE Lightweight Grand-Prix Quarterfinal round.

Here’s the tale of the tape in this clash of MMA lightweight giants:

He racked five straight wins to start his career then another six straight at the backend of his first 12 fights to go 11-1 for an impressive start.

He would go on to drop four of his next seven bouts, three of them in the ONE banner, before winning the next four that includes a knockout of Aoki to win the lightweight crown and a unanimous decision over EV Ting in his first defense.

Folayang then go 3-2 in his next fights that include losing the title to Martin Nguyen in 2017 and reclaiming the same in late 2018 against Amir Khan.

Thing is, his MMA career is generally limited to facing opponents in the Philippines and in Asia. He’s never faced somebody like Alvarez. Till August in Manila.

Alvarez, currently with a 29 win-7 loss-1 no contest record,  took his career off in a better start, going 18-2 in his first 20 fights, that culminated in his winning of the inaugural Bellator Lightweight World Championship during Bellator Season One Lightweight Tournament Final on June, 2009.

He would go on to win seven of his next eight fights including one successful defense and winning the title for a second time during a rematch against Michael Chandler on November 2013.

The only loss he suffered was a fourth round rear-naked choke submission to Chandler during their first match on November 2011 that caused him to loss the belt.

The rematch title fight turned out to be his last at Bellator, he was 25-3 at this time, as he took his talents to the UFC where he got an unruly welcome.

He lost his first bout against Donald Cerrone   and went on to register a pedestrian 4-3-1 in the promotion.

He, however, was able to win the UFC Lightweight Championship against Rafael dos Anjos by TKO by punches on July 2016 and bag the 2017 UFC Fight of the Year for knocking out Justin Gaethje during    UFC 218 on December 2017.

Among the losses he suffered was against the famous Connor McGregor in his first title defense on November 2017.

Fightmatrix.com currently ranks Alvarez as the 2nd best lightweight MMA fighter around the world while Folayang was ranked 114th best welterweight fighter. (Folayang started as a welterweight but now campaigns one rung below at lightweight)

Folayang and Alavarez’s losses appeared to derail the elevation of their respective championship aspirations at that time. Injuries to other fighters, however, played part of their fortune as their bout was made a semifinal clash for a spot in the ONE Lightweight Grand-Prix finals and a possible crack at the title.

An upset by the “Landslide” would not only give him another possible title shot, it will promote him higher in the echelon of the best MMA lightweights around the world.