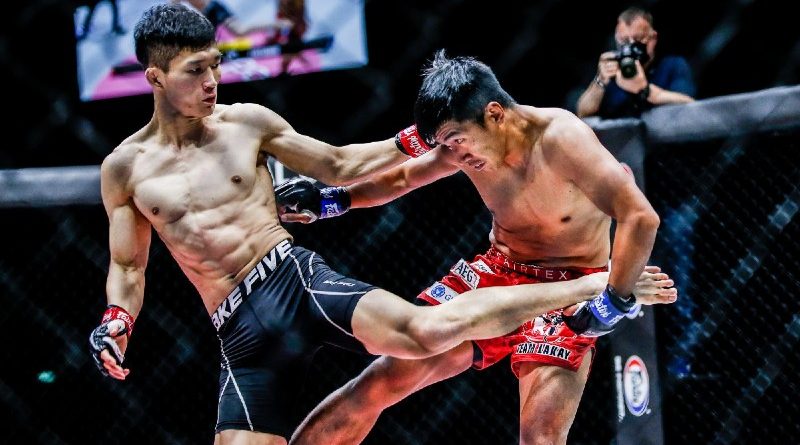 The Filipino contingent to the ONE:Inside the Matrix series almost got shutout but Geje Eustaquio provided the feel-good moment for the Pinoys during this campaign.

Eustaquio thwarted the challenge of Song Min Jong of Korea and scored a unanimous decision win during ONE: Inside the Matrix III, a prerecorded event held at the Singapore Indoor Stadium, the result of which were broadcasted on November 13, 2020.

The “Gravity” turned to Team Lakay’s well-known strength as his delivered his strikes with precision to earn the nod of the judges.

“As much as I wanted to finish the fight, we got a unanimous decision, and we didn’t expect things to happen that way.  Song Min Jong was very strong. My wrist hurt from striking him too much, and he was very durable. He really wanted to reach the end, and he had strong willpower.” said Eustaquio.

Eustaquio came up with a healthy mix of aggressiveness and countering set the table for his attacks. All fight long, he patiently waited for incoming strikes while looking for a leg to catch and trip his opponent to the canvas along with relentlessly pressing forward with punches and elbows whenever he has the chance.

Both techniques hit their target in the first round as Eustaquio clearly established the pace of the match.

Then he began landing the leg kicks, right hooks, and straight punches  at the start of the second while dodging majority of the kicks of Song.

As the round wore on, it became clear that the Team Lakay’s strikes were taking toll on Song as he frequently switched stances.

Eustaquio started the third on fire, connecting a spinning back kick and a spinning elbow in a short span. When song attempted a final push for a comeback late in the third with a triangle choke, Eustaquio worked his way to escape the hold and countered with a kneebar instead.

“I’m satisfied with my performance, but I also wanted to give the fans an impressive finish. At this level, it’s very hard. I did my best. I have the best coach on my side and we had a good training camp for this fight. The next thing I need to do is get back in the gym immediately and train again,” Eustaquio remarked.

Eustaquio hikes his fight record to 14-8 and proves he is still a force to reckon with in the stacked ONE flyweight division.

He is currently not ranked but this win boosted his chances to advance in the official ranking and possibly another title shot.

The other four Filipinos who campaigned in the event were one by one dropped like flies.

Eduard Folayang could not solve his younger and taller opponent, Antonio Caruso, as he suffered his fourth defeat in five fights by unanimous decision, a fight that saw him hit the deck in the second round, during main event last October 30, 2020.

Then Philippine karateka Ramon Gonzales was stopped by Indonesian wrestling champion Eko Roni Saputra in the second installment of Inside the Matrix.

Lastly, Kevin Belingon was knocked out by John Lineker and Lito Adiwang saw his seven-game streak end at the hands of Hiroba Minowa in the third installment that was shown along with Eustaquio’s victory.

This post has already been read 1130 times!The city is not yet inclined to open inter-regional public transportation to avoid