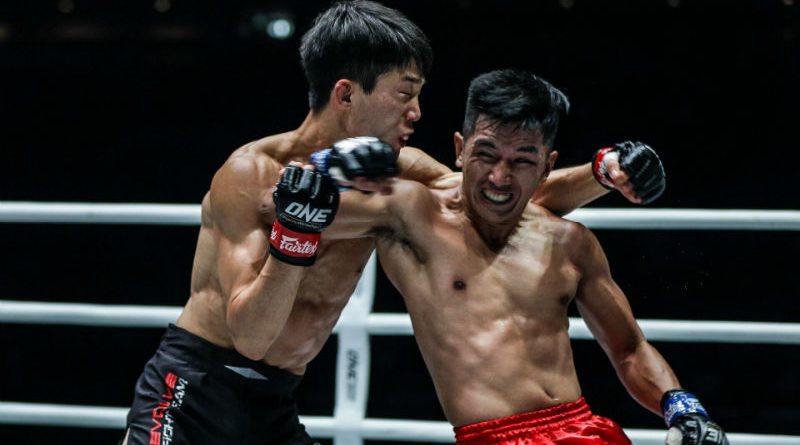 Former ONE Flyweight World Champion Geje “Gravity” Eustaquio will be back inside the ONE Circle soon.

But before he takes the stage once more, the 31-year-old veteran from Team Lakay has a close eye on an interesting flyweight showdown between fourth-ranked flyweight contender Yuya “Little Piranha” Wakamatsu of Japan and South Korea’s Kim Kyu Sung is featured on the card of ONE: INSIDE THE MATRIX II, a previously-recorded event from Singapore is scheduled for air on Friday, November 6.

Eustaquio, who has faced both men in the Circle, is eyeing a rematch with the winner of this highly-anticipated contest.

“This will be a very exciting fight. But having faced both of the guys, I sort of have an idea of how each will perform,” said Eustaquio. “Experience will play a big role in this fight. I think Yuya has much more experience than Kim Kyu Sung, and that will show in this matchup. But of course, this is mixed martial arts. Anything can happen in the Circle, and everybody has a chance to win.”

Eustaquio fought Kim in May of 2019, winning by unanimous decision after three rounds. Just a few months later, Eustaquio stepped into the Circle against Wakamatsu, but suffered a debilitating knockout loss at the hands of the Japanese warrior.

Being familiar with each man’s unique style, Eustaquio is confident Wakamatsu has enough to beat his South Korean foe.

“The real winner of this fight will be the fans. This is a crowd-pleasing matchup. That being said, it’s a tough pick, but I have Yuya Wakamatsu winning this one by unanimous decision,” said Eustaquio.

“I think there’s going to be a lot of head hunting for both. These guys are both very aggressive, and will be looking to knock each other out. I think the one who can play the better distance game can take home a decision win. Aside from that, it’s hard to predict the winner because both guys can end the fight quickly with a single punch.”

The Wakamatsu-Kim flyweight showdown is but one of many intriguing matchups on offer.

Eustaquio will have his hands full in a few weeks’ time. But after taking care of business, “Gravity” will be looking to make another run at the ONE World Title he last held nearly two years ago.

The 31-year-old veteran is confident he can manifest his dreams once again, and is quick to remind fans that he’s still very much a legitimate threat to the flyweight throne.

“I have no problem facing the winner, although I’m more interested in a rematch with Yuya to be honest. I know I’m a lot better in rematches, so I like my chances. But I’m also willing to do a rematch with Kim, that will be a good show. We have both improved since our last fight. It’s up to ONE Championship,” said Eustaquio.

“I am confident I am still in the flyweight title picture. There are only three kings in this division, and I am one of them. They can’t take me out of there unless I’m done with my career, and that’s far from the reality.”

Reigning ONE Welterweight World Champion Kiamrian Abbasov of Kyrgyzstan makes the first defense of his world title against undefeated top contender James Nakashima of the United States in the main event.

8       8SharesThis post has already been read 2769 times!The city identified some twelve priority investment areas that are expected to contribute in efforts