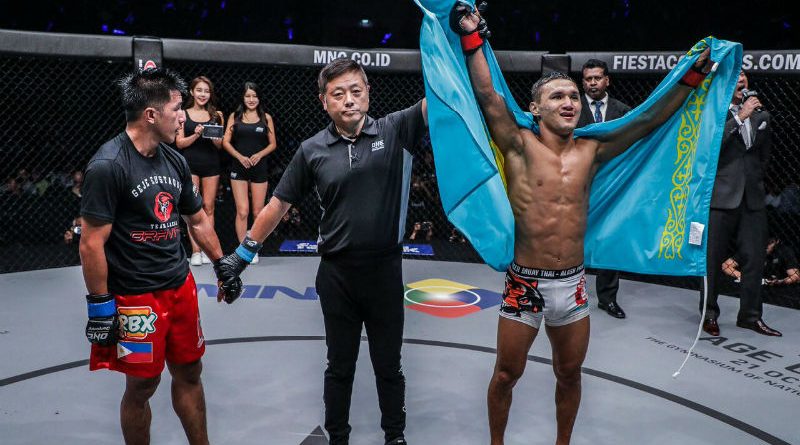 Geje Eustaquio must be feeling bad as he again got the short end of a split decision, but should be feeling good as even elite fighters could not take him out early inside an MMA cage.

Akhmetov used his wrestling skills to consistently bring Eustaquio to the canvas and control the action on the ground. Though Eustaquio would land his usual crisp, clean combinations throughout the contest, his effort wasn’t enough to offset Akhmetov’s grappling wizardry.

These two warriors were a well-matched pair of combatants in the cage.

Eustaquio, operated using his famous Team Lakay wushu stance and displayed his calm and fearsome strikes while “The Kazakh” Akhmetov would prefer to take the action down below to take advantage of his superior grappling skills

Akhmetov, got ahead in the first as he inevitably brought the action to the ground with his takedowns, working on ground and pound from top position.

Eustaquio would connect on two upward kicks, the second of which would become a controversial sequence towards the end of the first that it took Referee Yuji Shimada to call a timeout to check on Akhmetov after he failed to recognize the kick as a legal move.

“The Kazakh” continued putting pressure on Eustaquio in the second and went on to successfully execute two more takedowns. Eustaquio, however, landed a couple of counters to even the score.

Akhmetov caught a careless “Gravity” coming in with a beautifully-timed left hand to drop the Filipino to the canvas early in the third.

Eustaquio, however, reversed it instead and took Akhmetov down himself, winding up in top control as the final bell sounded.

Akhmetov improves his overall record to 24-1 while Eustaquio slides to 9-6.

This was the fourth split decision result for Eustaquio during his MMA career, his third in a ONE bout. He performed badly, losing three of them. He earlier halved the Anatpong Bunrad decisions, losing the first and exacting revenge in the second, and lost to David Cho in his third MMA bout during the Pacific Xtreme Combat 28 bout held on November 26, 2011.

See story on Gravity’s win: Exact Revenge: Eustaquio Dealt Bunrad the same defeat he suffered a couple of years ago

Eustaquio is neither a stranger for matches that go the full route as five of his 11 remaining bouts resulted to unanimous decisions. That would make a total nine decisions in 15 fights all in all.

He fared better in the unanimous versions, winning four while losing one. The judges saw him as victor over Gianni Subba, Kentaro Watanabe, Eugene Toquero and Alex Silva. He lost only to Andrew Leone.

Both Akhmetov and Eustaquio had been looking to use their bout as a springboard to another showdown with reigning ONE Flyweight World Champion Adriano Moraes, who just reclaimed his title from Akhmetov in early August in Macao.

On the other hand, Roy Dolinquez and Ramon Gonzales carried the Phillipine flag in this card.

In a battle of former ONE world title challengers, Doliguez, former professional boxer, stopped Yago Bryan of Brazil in the third to win by technical knockout.

Doliguez, operating behind his world-class boxing stance, would keep Bryan on the outside with fast kicks and punch combinations in the gruelling contest from start to finish, where both competitors were also very evenly matched.

Although Bryan would land the cleaner, stronger punches throughout the bout, Doliguez soon began to find his range late into the contest. A straight left hand down the middle felled Bryan beyond recovery in the third round.

After dominating the first round with his striking, Gonzales was able to take Liu De Li to the mat near the halfway point of the second, where he secured side control and swiftly locked in the choke moments after.