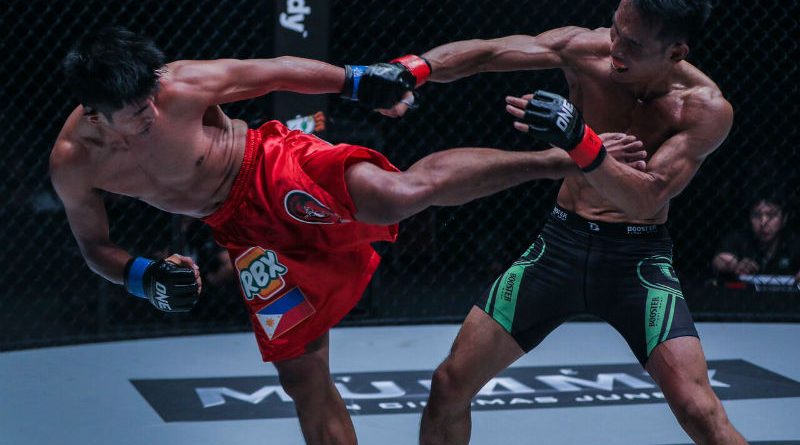 After being relegated in the undercard during his last five bouts spanning three years in ONE Championship matches, Geje “Gravity” Eustaquio again finds his name on the top bill of the Total Victory card in Jakarta, Indonesia this September 16.

Eustaquio is set to face former flyweight kingpin Kairat “The Kazakh” Akhmetov in the main event of ONE: TOTAL VICTORY.

The last time that Eustaquio headlined a ONE Championship card was when he vied for the inaugural ONE Flyweight World Championship in a losing effort against Adriano Moraes way back September of 2014.

Since yielding to Moraes, Eustaquio has won three of his last five matches, including a first-round knockout victory over Malaysian stalwart Saiful “The Vampire” Merican last January, 2016 and a split decision win over Thai rival Anatpong Bunrad in their rematch just last May.

Also seeing action in the undercard of the event are Filipinos Roy Doliquez and Ramon “The Bicolano” Gonzales.

Doliguez, a former professional boxer with more than 40 pro bouts and considered one of the best strawweights in Asia, is going up against fellow former title contender Yago Bryan, 25-year native of Rio de Janeiro, Brazil.

The 30-year-old Gonzales make his third appearance under the ONE banner against “The Little Squirrel” Liu De Li Ge Ri Hu of Mongolia.

Gonzales, representing Burn Soriano’s Hitman MMA, has proven his karate mastery in competitions all over the world. The former two-time Philippine National Kyokushin Karate Champion is looking to fully showcase his potential in ONE Championship as well.

Eustaquio sees it as a privilege to be in the main event picture of ONE: TOTAL VICTORY opposite a former champion like Akhmetov.

“I worked hard to be back in this position again. It’s truly an honor and a privilege. Thank you ONE Championship for the opportunity and the trust to headline a stacked card like this one. I will showcase my best skills in this bout and take home the win for the Philippines,” he expressed.

“Kairat Akhmetov is a world-class athlete in this sport. I can’t wait to test my skills against him inside the cage. When the cage door closes, it’s time for battle. I will make sure to come well prepared for this bout,” Eustaquio added.

The 28-year-old Baguio City native has focused intently on his wrestling and grappling, looking to make those disciplines an area of strength against Akhmetov.

“My ground game is coming. My wrestling is coming. I believe if you’re going to compare it with others, it’s not very low in terms of performance in wrestling or grappling,” Eustaquio stated. “Honestly speaking, I am not that far behind.”

Akhmetov boasts a solid 23-1 professional record amassed during a stellar martial arts career, which has seen him dominate his opponents with tenacious wrestling and powerful striking.

“I am prepared wherever the bout goes. I know Kairat Akhmetov has a good grappling background. I have a well-planned strategy for now,” Eustaquio assured.

The previously-unbeaten Akhmetov, who also tasted defeat in the hands of Moraes just recently, losing his title via a unanimous decision in a championship unification clash this past August, probably still has the bitter taste of defeat in his mouth following what was the first loss of his career.

The 29-year-old Kazakh combatant would want nothing more than to get back in the cage with Moraes to regain his gold-plated strap.

Eustaquio, however, stands firmly in his way as the Filipino mixed martial artist restarted his flyweight campaign with the win over Bunrad.

For Eustaquio, he has everything to gain in this upcoming contest as he believes that a convincing win will lead him closer to a rematch and an eventual title shot at Moraes’ ONE Flyweight World Championship belt.

“I want this win. I want to have a remarkable winning result, and then I want to move forward onto that flyweight belt. I am back in the main event. My next goal is to be back in the title hunt,” he ended.

Also seeing action in the card are:

Cameroonian Alain “The Panther” Ngalani, who trains out of Impakt MMA in Hong Kong, who looks to surprise local fans in attendance with another spectacular performance in taking on former title challenger Japanese heavyweight Hideki Sekine;

Indonesian martial artist “The Terminator” Sunoto, who is looking to continue his winning ways in duking it out with 19-year-old Thai Rithy of Cambodia, a KWC Featherweight Champion making his ONE Championship debut;

Two promising young bantamweight prospects: striking specialist Riski Umar and compatriot Adi Nugroho. The debuting Umar seeks to stop Nugroho, who previously won his debut match, in a three-round contest to kick off the action of the card.