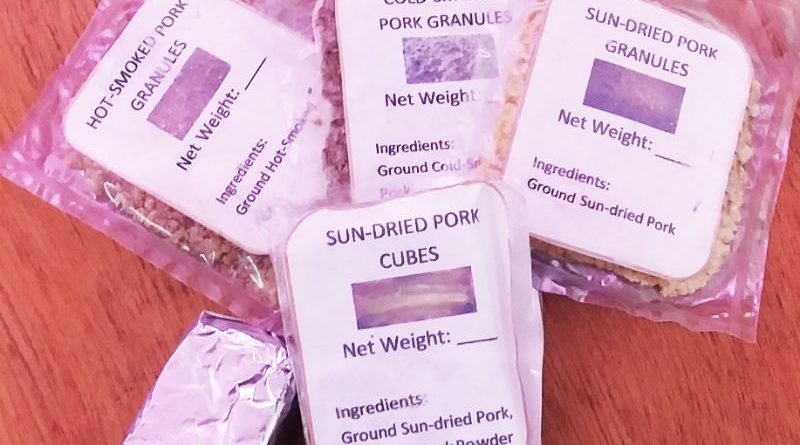 Etag is a native delicacy in the Cordillera Administrative Region (CAR) made of pork cured in salt and then sun-dried or smoked. The flavor of this delicacy may soon be enjoyed in the form of granules, cubes and liquid seasoning. These etag-based convenience-type products were developed after a series of experiments, tests and adjustments at the Benguet State University-College of Home Economics and Technology (BSU-CHET) as part of a research that also aims to develop a standard quality assurance protocol for etag raw materials. This is also in support to the etag production and native pigs industry of the region.

“The products are made of native pork processed in its pure form through dehydration, concentration and reduction,” explained Cynthia Garambas of BSU-CHET who led the research. She added that the advantage of using pork from native Cordillera pigs is its quality of marbling or the good balance of lean meat and fat.

“Sensory evaluation for the acceptability of the products was extended to the non-city consumers in order to gain insight on the market potential of the products outside Cordillera. It was noted that all the etag variants when developed into etag cubes and granules are acceptable to non-city evaluators. As to the developed liquid seasoning, it was found out that the cold-smoked and sun-dried variants are not acceptable to the non-city evaluators due to the intense smoky flavor and the concentration of salt in the sun-dried variant,” Garambas said.

The etag research also looked into the production cost and pricing of the products. The determined selling price costs PhP 5.60 for one etag cube, PhP 9.22 for a pack of etag granules and PhP 45.07 for a 50 ml bottle of etag liquid seasoning. According to Garambas, an etag recipe book is underway and it contains dishes where the convenience-type products could be used such as in stews and soups.

BSU has been conducting researches for the commercialization of etag with the general aim to standardize etag production and processing. ­­The ­PCAARRD-BSU R&D project in 2015 titled “Value Adding of Cordillera Pork-Based Ethnic Food Delicacy (Etag) for Commercialization” has generated technologies that led to the production of food safety compliant etag and optimized the process of making three etag variants namely hot-smoked, cold-smoked and sun-dried.

“Cordillerans serve etag and other ethnic foods to guests as they take pride in showing their customs, dances, music and other crafts to city and foreign tourists in the region. In 2007, during the first Ethnic Food Fair in La Trinidad, etag and other pork-based delicacies were among the popular exhibits. Inclusion of these pork-based delicacies in the menu of high-end restaurants that cater to tourists highlights the market potential of these native food products,” said Balauro.