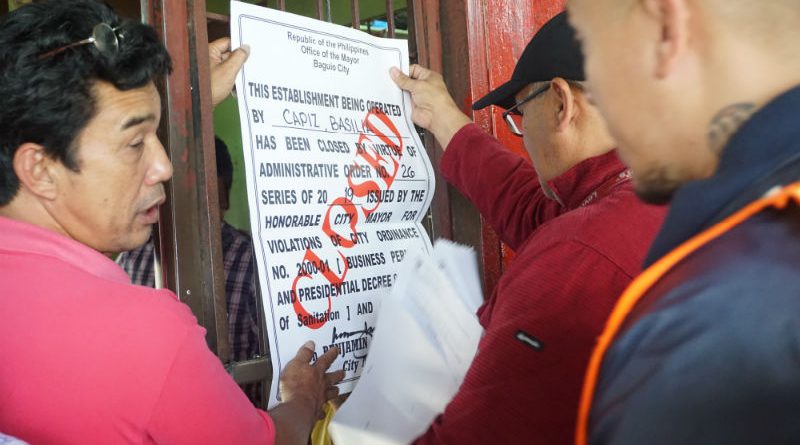 BAGUIO CITY  – The city government underscored that the recent successive closure of different establishments that deviated from the business permits issued them should serve as a stern warning to them to strictly adhere to their line of business stipulated in their issued permits.

Mayor Benjamin B. Magalong said his administration means business in closing the operation of businesses without permits and those that deviate from their lines of business stipulated in the permits granted them by the city to ensure that their business operations will continue.

“We want to send a clear message to our business owners that their establishments will be closed once discovered they deviated from the permit issued them by the city government,” Magalong stressed.

One of the famous establishments closed by the city government last week was The Camp along Leonard Wood Road after it was discovered that it deviated from the permit to operate a restaurant as it actually operates as a bar at night which is not included in the permit.

He urged establishment owners not to deviate from the line of business stipulated in the permits issued to them by the city government if they want their operations to continue because violations of the permit result to the closure of their establishments.

According to him, the city government will aggressively campaign to close the operation of establishments without permits and those establishments that deviate from their line of businesses stipulated in their permits for force erring businessmen will adhere to the rules and regulations governing their operations.

The city mayor claimed that appropriate sanctions will be imposed by the city government against those who continue to willfully violate existing laws, rules and regulations governing their business operations for them to tow the line and prevent numerous reports against illegally operating businesses and those establishments that deviate from their permitted line of business.

He appealed to business owners to first secure the required permits prior to their operation to avoid the unnecessary interruptions in the conduct of their business operations amidst the campaign against illegally operating businesses even in the barangays.

The city government will tap the cooperation of barangay officials to help in the intensified operations against  business establishments operating without permits, thus, businesses that continue to operate without permits must already secure their permits before their unwarranted closure or the possible imposition of sanctions against the owners once they are discovered operating without the appropriate permit.

By Dexter A. See
File Photo by Rosa Moresto