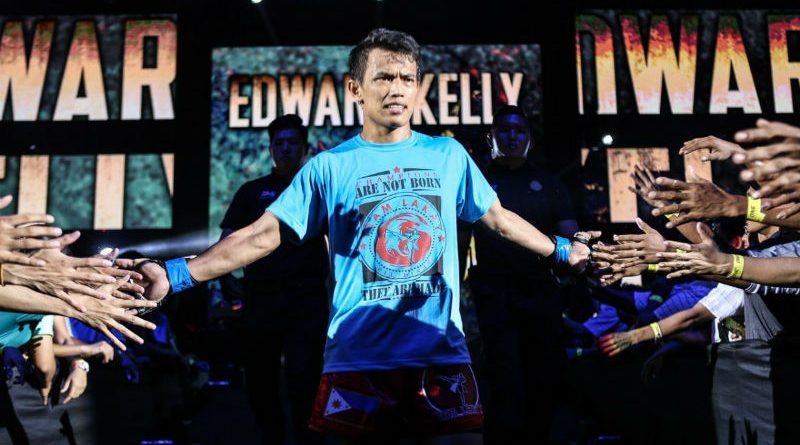 The 33-year-old Baguio City native punctuated his 2016 calendar on a high note by stopping Indonesian standout Sunoto by way of third-round technical knockout in December.

Eric, who is only two years older than Edward, stressed that he is proud of his brother’s recent accomplishments under the ONE Championship banner, citing the latter’s ability to overcome adversity and his determination to develop as a competitor in the constantly-evolving sport.

Prior to his victory parade in ONE Championship, Edward had a jagged beginning in the promotion, losing to Brazilian contender Herbert “The Blaze” Burns by way of 44-second submission in December 2013 and then suffering a first-round knockout defeat to Malaysian-Kiwi sensation Ev Ting in October 2014.

Edward erased the harsh memories of his painful setbacks by defeating three high-profile opponents in 2016.

“I am so proud of him. It’s impressive because despite the losses, he was able to improve and bounce back with three big wins. I am happy that he is reaping the fruits of his labor,” Eric said of Edward.

However, the two brothers find themselves in a very different scenario as Eric is currently reeling from a three-match losing skid, bowing down to Ting via third-round submission in January 2016 before falling to Mongolian kickboxer Jadambaa Narantungalag via 44-second knockout in July 2016.

Eric’s quest to reinsert his name into the winner’s column was spoiled by Japanese legend Kotetsu “No Face” Boku last August 5 when the former ONE Lightweight World Champion scored a third-round stoppage triumph against the celebrated Filipino combatant.

Even though Eric is on a downward spiral, he is not turning his back on the sport that catapulted him to stardom.

“I really feel disappointed with what happened. I was really prepared for my bout against Kotetsu Boku, but there are things that it’s beyond our control. I am fine and no harm done. But I cannot deny that I am disappointed. I have to accept the outcome. It is a hard lesson for me, but I will be back as an improved and better fighter,” he guaranteed.

Eric, who is widely regarded as one of the most talented products of the established Philippine martial arts scene, sees a bright future ahead of Edward and does not mind losing the spotlight to his younger brother as both of them compete in ONE Championship’s 70.3-kilogram weight class.

“I see a bright future in his professional martial arts career. Edward should keep on striving. It’s his moment,” he shared.

According to Eric, Edward’s latest success in ONE Championship adds fire to his desire to place himself back on the winning track

“His wins in ONE Championship motivate me. It keeps me motivated and aware that I have to seriously focus on my improvement as a competitor inside that cage,” he stated

“Right now, I need some little time for myself and think about what happened, but it won’t be long because I want to get back inside the cage and redeem myself. I won’t throw in the towel that easy. I have to go back to the drawing board and address the problem. There are still a lot left in me,” Eric added.

After eight months of waiting for a call to compete again, Edward returns to action as he is set to duke it out with promotion newcomer Emilio “The Honey Badger” Urrutia of the United States on the undercard of ONE: QUEST FOR GREATNESS in Kuala Lumpur, Malaysia on 18 August.

Eric is confident that Edward will have his hand raised against Urrutia, who won two-straight matches in 2016.

“You can see Edward’s improvement every time he steps inside the cage. He always brings in something new. I am super confident that he will walk out victorious,” he ended.