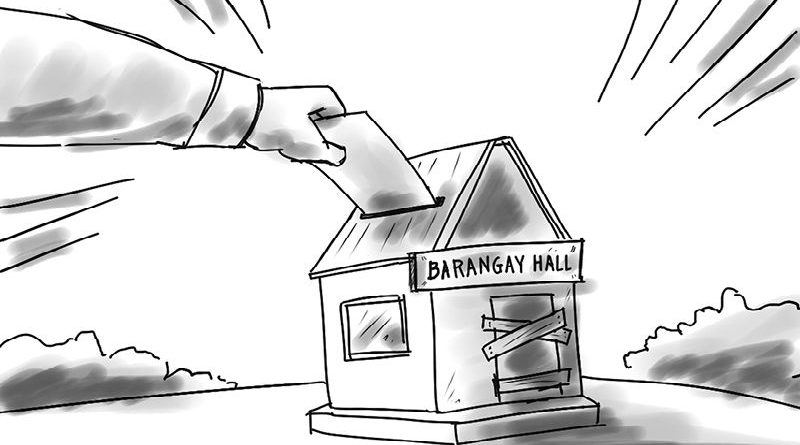 The May 14, 2018 synchronized barangay and Sangguniang Kabataan (SK) elections will definitely push through as scheduled amidst the latch ditch efforts of some interest groups and members of the House of Representatives to rest the said polls to a later date in October this year. Under the country’s present set up of the bureaucracy, the barangay is the smallest political subdivision which is probably the breeding ground of upcoming politicians possibly in some areas around the nation. The country’s village type of governance is considered to be unique but it has become one of the most effective means of administering a political subdivision, especially when leaders and the populace embrace common history, culture and traditions that were passed on through generations.

Baranggay officials are the luckiest politicians in our country because their election to public office can be easily extended by lawmakers, especially if they want to win the votes of the punong barangays, kagawads, secretaries, treasurers and other public servants in the over 42,000 barangays of the country.  The repeated postponement of the political exercise has its positive and negative impact to the electorate. Those who are in favor of resetting the barangay and SK elections claim that they are satisfied of the services being provided by their own officials aside from the fact that it will entail the appropriate savings in terms of government expenditures and campaign expenses by the aspiring candidates among others. On the other hand, those against the postponement of the barangay and SK elections argue the fact that by moving the date of the elections will deprive the people of their right to vote and for aspirants to the positions of punong barangays and kagawads to be voted upon by their constituents apart from the supposed violations of the prescribed term of office of barangay officials which is supposedly three years among other reasons.

People want the synchronized barangay and SK elections to push through because it will allow the election of representatives of the youth to the barangay councils and eventually to the municipal and city councils as well as provincial boards for the advancement of their rights after the youth was deprived the appropriate representation when the SK Reform Act was being deliberated in both chambers of Congress.

We subscribe to the idea of most electorate that incumbent barangay officials were able to get what they want from the two extensions granted to them by laws that were enacted for the purpose. It is high time that we allow our people their constitutional right to suffrage for us to be able to retain or replace our incumbent barangay officials. The ball on whether to retain or replace our barangay leaders actually lies on the hands of the electorate.

Surely, there will be numerous maneuverings that will be done for the interest of people aspiring for elected positions in the barangay level but let us not allow such tactics to decide our votes when we can’t them on Election Day. Let us learn to defuse the election fever by keeping in ourselves the people whom we want to vote for as our future leaders in our barangays.

Unopposed candidates for barangay posts deserve pats on their backs because they were able to prove to their constituents and critics that they can lead their barangays to greater heights.

Let us be reminded of the fact that a good leader should be a good follower. Now that the election period has not become effective, aspirants for the elective positions in the barangays are now discretely trying to maneuver themselves to gain the attention of their constituents and for them to gain their votes on Election Day. Remember that the election period is still more than a week that is why election-related activities are still prohibited. Unfortunately, desperate candidates and their supporters seem not satisfied on their standing in the barangays that is why they are now working extra hard to gain the votes of the electorate

We are wondering why there are some individuals who are desperate into being elected to a desired position in the barangay where he belongs. If it is for the will to serve, then it will be good for the residents but if it is for selfish and personal reasons and aggrandizement, then it will be a different story to tell.

We certainly believe that there are other hidden reasons why a good number of individuals want to gain positions even in the barangay level. Surely, it is not for the compensation because barangay officials in the city are not actually well compensated because most of the city’s barangays do not qualify as a barangay pursuant to the guidelines enshrined under the Local Government code. Supposedly, barangay officials should receive descent salaries but the insufficient income generated by the barangays and their failure to qualify in terms of population is now taking its toll to barangay officials in Baguio City because the meager funds are being equitably divided for personnel services, maintenance and other operating expenses of the barangays, capital outlay for projects among others.

Much yet has to be done to empower our barangay officials and electorate to get rid of the early political fever for them to concentrate on the priority programs of government before seeking elective positions. Let us work together to empower our electorate to vote for the right people in public service.