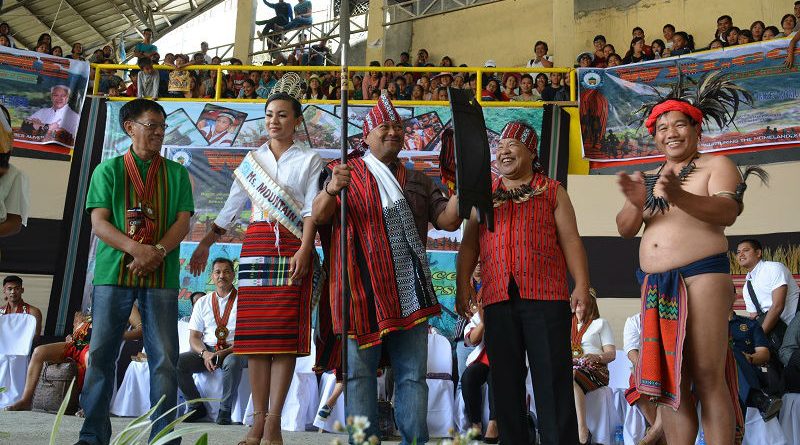 BONTOC, Mountain Province  – Senator Joseph Victor Ejercito was formally adopted as a son of this landlocked province during the celebration of the 14th Lang-ay festival which was held at the Eyeb grounds Saturday morning.

Senator Ejercito, who was one of the province’s guest of honor and speaker during the Lang-ay festival program, was given the local name ‘bulanglang’ or community provider courtesy of the province’s Indigenous Peoples Mandatory Representative (IPMR and boardmember Thomas Tawagen, Sr..

Boardmember Tawagen explained that ‘bulanglang’ or community provider is the elder in a village where people look upon for their needs, thus, he provides for what the people seek from him in cases where his assistance is badly needed.

Upon his adoption as the province’s adopted son, Senator Ejercito was clothed with the so-called ‘pinagpagan’ or the multi-colored woven cloth that guarantees his protection from whatever bad intentions against him, he was also given the famous ‘wanes’ or G-string which he could wear in special occasions, he was given the traditional ‘bedbed’ or the head band that symbolizes his being a warrior and he was given the ‘tubay’ and ‘kalasag’ or the spear and shield which he could for his protection when in danger.

Gov. Bonifacio Lacwasn , Jr. said adopting as sons and daughters guest speakers of the province during the celebration of its annual Lang-ay festival is showing the respect and officialdom to their visitors.

“Adopting our guest of speakers as sons and daughters of Mountain Province is our simple way of showing our gratitude to them for spending their precious time in joining us to celebrate our own festival,” Lacwasan stressed.

Senator Ejercito claimed that he was surprised about the adoption rites prepared for him and expressed his gratitude to the people and officialdom of the province for honoring him and adopting him as son of the province.

“I am grateful to the people and officials of Mountain Province for giving me a warm welcome and adopting me as a son of the province. Rest assured that I will try my best to extend the needed assistance to the provincial government in whatever form as my way of thanking the people for their warm welcome,” Ejercito added.

The senator said that Mountain Province is one of the scenic places in the country that he has ever visited because of its well preserved environment that projects its natural beauty as an ecotourism destination.

Ejercito arrived in the province using his big bike passing through the famous Bontoc-Banaue road, one of the better paved roads in the Cordillera which was a flagship project of former President and now Pampanga Rep. Gloria Macapagal-Arroyo through her State of the Nation Address (SONA) projects.

The lawmaker vowed that he will help the province sufficient funds for the development of the province’s inter-municipal, inter-provincial and inter-regional road network to help entice more foreign and domestic visitors to frequent the scenic tourist spots around the province in the future.