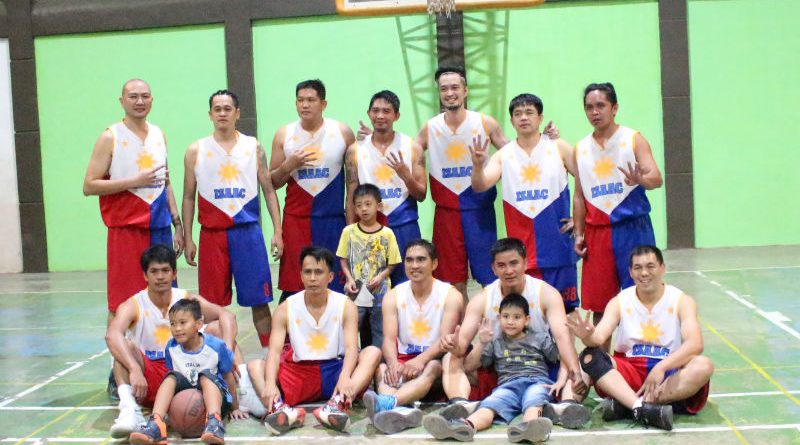 LA TRINIDAD, Benguet – Rudolf Eilinger did a Stephen Curry-like performance from downtown to power the 35Up team of Isaac in bagging one of their three titles at the fifth edition of the Liga La Trinidad last December 10, 2017 at the La Trinidad Municipal gym, here.

Eilinger’s long distance shooting enabled Isaac to overhaul an early lead by the Isaiah 7:14 Bulldogs and hold off two spirited comebacks enroute to a 104-89 victory.

The Bulldogs sprinted to an early 19-7 lead, their biggest in the game, just under four minutes in the first behind two triples of Rene Laguit.

Isaac then decided to push the accelerator as the second quarter started. A 9-0 attack led by Eilinger’s five points that includes a trey to gave Isaac the lead back, 28-26, their first taste since the holding a 5-2 count early in the first.

Another triple from the parking lot by Eilenger over the upraised arms of his defender made it 31-26 before Mark Molina scored a basket to monentarily stop the bleeding.

Eilinger banged in two more treys to spark an 8-0 run and push Isaac to its biggest lead so far, 39-28.

Two points each by Laguit, Molina, and Joseph Orinion against a twinner by Michael Hermosado made it 41-34.

Isaac then banged in seven straight points to move up 48-34 before Isaiah answered with a 9-5 of their own to prevent Isaac from running up the score at halftime, 53-43.

Isaac tried pulling away again, opening the quarter with a 16-9 blast and ballooning their lead to17 points, 69-52, midway through the third.

Both teams had to sit a key player, Dave Stapley for the Bulldogs and Eilinger for Isaac, on foul trouble.

Weng Pascual canned in nine to start the rally while Laguit scattered seven to finish it.

Stapley returns to the floor to start the final canto and promptly convert a basket along with a freethrow by Molina to push the Bulldogs closer, 72-75 and seemingly make it a close game at the end.

Eilinger, also back on the floor, made sure that was the closest the Bulldogs would be inching as he bailed Isaac for the second time with his timely three-point hits.

He knocked in his last basket making the score 88-77 before fouling out of the game, midway through the fourth.

It did no matter much as Tolentino scored eight while Jumar Viado added six to finish the job for Isaac.

Eilinger finished the night with 36 points that includes seven triples.

It was a shootout at the OK Corral for individual honors as Laguit practically had the same output, 36 points, also powered by seven triples along with nine freethrows.

Viado and Tolentino supported Eilinger with their 19 and 15, respectively.

Molina, Stapley and Pascual scored 17, 15, and 14, respectively for the Bulldogs.