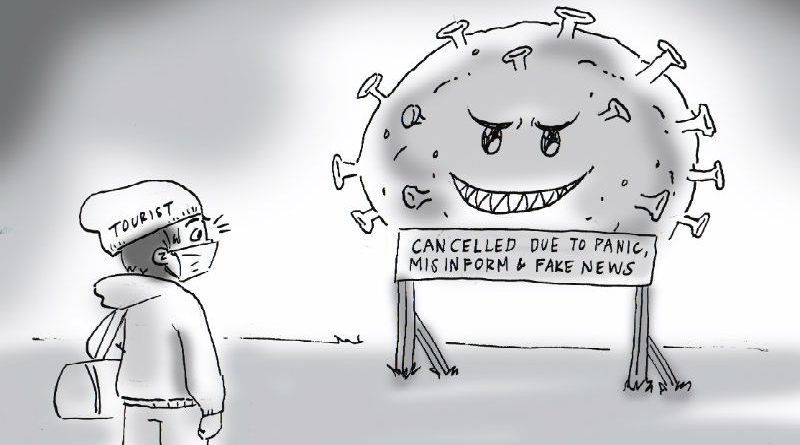 Acute Respiratory Syndrome (SARS) that was followed by the meningococcemia in 2005 and the Middle East Respiratory Syndrome Corona virus (MERSCOV) in 2012. Despite the numerous deaths that have been caused by the various strains of the corona virus that struck different parts of the world, scientists were able to discover the appropriate medication once the virus will again affect a huge part of the population anytime.

Today, the world is now confronted with another strain of the corona virus which is known as the Novel Corona virus or the 2019 nCoV. The world is in the midst of a panic or scare because some countries, including the Philippines, were not able to handle the situation which is now affecting the tourism and business sectors following the cancellations of bookings in hotels in different tourist destinations worldwide.  In the Philippines, there were 3 confirmed nCoV cases who are mostly Chinese nationals while the only Pinoy that was able to contract the illness is undergoing medical treatment in Japan considering that he was found to have acquired the infection while working in the cruise ship.

As a result of the nCoV scare, many local governments were compelled to cancel their major crowd drawing events and tourism-related activities to prevent people who might be infected with the illness from flocking to their places and spreading the same to others that could result to an epidemic once the spread of the illness will be beyond the control of health authorities.

The health department has time and again reiterated that the situation is still under control considering that all the necessary protocols have been put in place from the detection of the symptoms, quarantine, recovery, treatment among others, thus, there is no need for the people to panic about the situation.

Ironically, the actual situation of the nCoV scare has been aggravated by the irresponsible posts of individuals in the social media that caused panic among the people to the extent that even the supply of ordinary masks in the market has been affected wherein people who really need the said masks for protective purposes are the ones that have been deprived of such considering the panic buying that had been done following the scare. Even the mainstream media which is supposed to be the source of reliable information had been overpowered by the irresponsible posts in the social media which now caused the confusion among our people on the real situation on the ground.

There are some people who claim that it is better for them to have become overacting which led to our current situation that is now greatly affecting our business people and the opportunity lost for them to earn a decent income right at the height of the influx of visitors.

Obviously, the situation is being blown out of proportion by no less than the keyboard warriors who seem to be experts on the field of health even if they are simply ordinary individuals. Our situation now is that we are in the panic mode which could worsen if we will not be able to get our acts together in using our comment sense to decipher what is right or wrong on what is being posted in the social media.

We believe that the untimely postponement of major crowd drawing events in our midst has sent the wrong signal to others that we seem to be carried away by our emotions in deciding on important activities that will happen in our midst. Surely, there are investors who are watching the decision-making of our local officials and surely, they are not satisfied or convinced by what they have seen over the past several weeks. Some of our local officials are now desperate in defending their previous actions on the nCoV scare by stipulating that being overacting is better than having the people suffer the consequences of acquiring the illness which is partly correct. However, people should remember that the confirmed carriers of the viral infection are Chinese nationals and if there are Filipinos who were able to test positive on having the virus, they are working overseas, thus, it seems that the panic bottom had been pressed by our authorities too early which is now taking its toll on the business sector which is driving our local and national economy in the first place.

While we agree that the health and the safety of the people has been the primordial consideration in the postponement of major crowd drawing events in the areas of jurisdiction of some local governments, we believe that local officials who made premature pronouncements on the suspension of events in their places over reacted on the matter and were not guided by such premises but instead considered emotions over comment sense which aggravated the situation of panic.

It is high time that our local officials look back and reconsider their decision on the matter because it will be again very difficult for the concerned stakeholders to recover from the slump where they are ow placed with the controversial nCoV SCARE. Let us effectively and efficiently handle the situation before it will be blown out of proportion and bring our places to a slump that will make our lives difficult.

This post has already been read 2378 times!The city identified some twelve priority investment areas that are expected to contribute in efforts