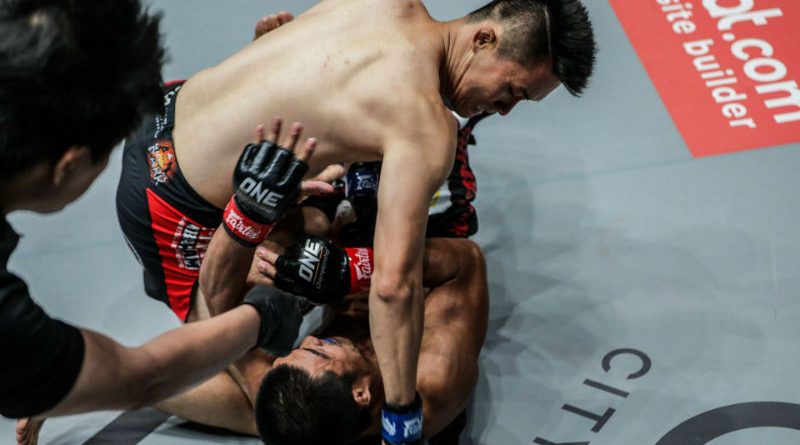 “During the last few moments, I was shouting in frustration that the referee had not yet stopped the contest. I wanted to get the finish, and he was taking so much damage. Nevertheless, I was prepared to fight to the end, to do whatever it took to get the win.”

These were the words of Edward “The Ferocious” Kelly in describing to ONE Championship the ending of his match with Sung Jong Lee at ONE: ROOTS OF HONOR last April 12, 2019 at the Mall of Asia Arena.

It will be recalled that these two warriors never let up the action from the opening bell as they jockeyed for superior position both on their feet and on the mat.

Both fighters clearly went to their bread and butter move as Kelly relied on his strikes to bail him out from the submission attempts of his NAGA No-Gi Grappling Champion rival.

The Team Lakay star got in trouble multiple times from the Korean’s Brazilian Jiu-Jitsu attack but always found a way to avoid being submitted and punched his way to the most hard-earned win of his career.

Kelly credits his change of mindset as the key to his latest victory. “I knew that if I wanted to start winning and turn my career around… I have to have that finisher’s mentality where I’m not looking to leave matters at the hands of the judges. At the same time, I was never going to tap. I’m strong, and I can handle the pain. “I wasn’t going to leave that cage without the win.”, he said.

That’s what he exactly did. While Lee was persistent in his attempts to capture Kelly’s leg, Kelly kept his calm and found various ways to escape the hold while refused to succumb to pressure.

Kelly also acknowledged his deficiency in the grappling area and was not satisfied he got the win. “Though I got the win, I still ask myself why he was able to take me down and why I allowed myself to be in such a dangerous situation.”, he said.

He pointed out his being fortunate that night and the need for improving in this area. “I have to head back to the drawing board and prevent this from happening in the future. I was fortunate this time around, but I can’t keep playing with fire like that.”, he continued.

He also said he got nervous when asked about getting a yellow card for an accidental foul. “I felt weak when the referee pulled us apart and called for an injury time out. I knew that it was not a solid blow to his head and it was by accident, given that we were both on the ground.”, he said.

“I was really nervous because I remembered what happened to my teammate Kevin [Belingon] in Japan. That instantly came to my mind. I was hoping Lee was okay and that we could continue with the match. When the referee gave me the yellow card, and declared that the match would continue, I was relieved.”

Getting a yellow card in ONE means that a 10% deduction from the purse of the offending party. It is intended to be just a warning and not to be counted in the judges’ scorecards. Kelly, however, felt the yellow card could somehow influence the judges and became more motivated to end the bout before the final bell.

Kelly also paid tribute to Lee’s ability to take a punch and continue fighting despite the damage he absorbs.

“I was surprised that the referee did not step in and stop the match sooner. I hit him with a lot of shots, and I was already getting very tired of throwing so many. I was on the brink of gassing out. My tank was empty.”, he noted.

“I was super impressed with Lee’s ability to take shots and continue grappling with a clear mind. He was composed in there, and that’s probably what caught me off guard the most. He never panicked and constantly threatened with submissions.”, he continued.

Still, the highlight of all that took place that night was his employment of a “killer’s instinct”.

Filipinos have shown in the past how to show compassion in the heat of the battle during combat sports like MMA and boxing.

Manny Pacquiao famously asks the referee to stop his fight while softening the rain of blows to Antonio Margarito. Stephen Loman replicated the same while kinda pulling back in pummeling a hapless Elias Boudegzdame on the mat during their Brave title bout earlier this year.

Frankly to be told, it is difficult to find the proper mixture of compassion and finishing off an opponent in combat sports.

Pacquiao and Loman may have made the right decision but one should not forget Jose Luis Castillo’s first fight against Diego Corrales.

Both men came in bout to engage and went to trade hard combinations and power punches throughout the entire fight. Castillo, however, seems to be the one who is getting the better of the exchanges.

In the tenth round, Castillo, the fresher fighter at this stage of the fight, knocked Corrales down twice and forced a point deduction for excessive spitting out of the mouthpiece. With the bout on the verged of being stopped, Castillo was unable to drive the final nail to the coffin.

Instead, in the same round, he went to absorb a perfectly timed right hand that had him on rubbery legs and cost him the match as Corrales unload more blows forcing the stoppage.

Kelly faced a persistent opponent and found the perfect time to make the “finisher’s mentality” rule his mindset that night to pave his way to victory against his pesky rival.

By: ARMANDO BOLISLIS
Banner photo by: ONE Championship