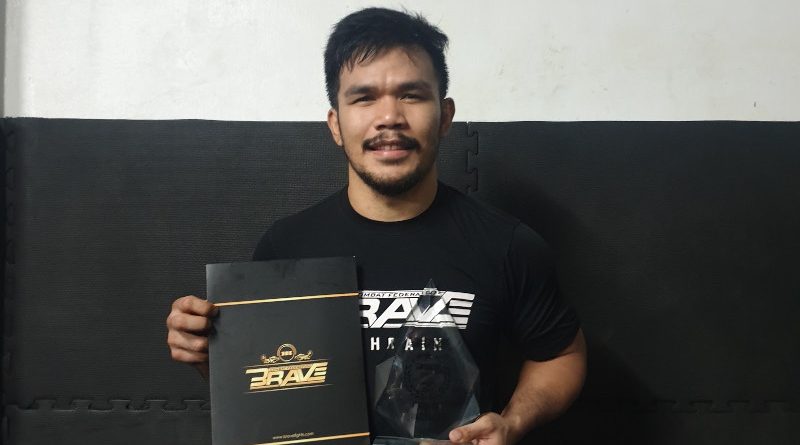 Rolando Dy capped his productive year that includes twin victories and a wedding by winning the 2020 BRAVE CF Fighter of the Year award.

Clearly living up to his moniker “The Incredible” with a career-defining 12 months, in which he claimed two noteworthy victories to inch him closer to a chance of vying for a world title shot in the lightweight division, BRAVE Combat Federation bestowed upon him the promotion’s most prestigious annual citation.

“It’s truly an honor to have this award. This trophy is a testament of my dedication, hard work, and sacrifice to be one of the best fighters in the world. It is a very proud moment for myself, my family and my beloved country. Hopefully, this is the first of many,” Dy stated.

The mixed martial artist son of boxing legend Rolando Navarrete surprisingly buckled the odds presented by the different COVID-19 challenges that negatively affected almost everyone in the world to lift his prizefighting career even more.

Even among the dominant world champions, serial finishers, and other stars on the BRAVE CF roster, no one can quite match his run in 2020.

Coming off two-straight heartbreaking defeats as a featherweight in 2019, Dy took the risk and turned his attention to the weight class above.

The enigmatic Filipino’s first act of an unbelievable campaign was to flew to Bahrain for a short-notice bout against Polish knockout artist Maciek Gierszewski at BRAVE CF 42 this past September.

Despite having to step up a weight class to take on a bigger and much stronger man, he was more than up to the task as he produced a sensational performance to claw his way to a hard-earned split decision win.

“I just showed in the fight last September that I am not a one-dimensional fighter. I was able to strike, grapple, take and defend his best shots, and dictate the tempo from start to finish,” the 29-year-old recalled. “They say I am only a striker. That fight only proved that I am a complete fighter.”

Dy’s 2020 was sent into overdrive when the promotion offered him to step in for an injured Sam Patterson in a lightweight title eliminator versus John Brewin at BRAVE CF 44 last November.

On just 14 days’ notice, Dy accepted the match and flew again to Bahrain to duke it out with Brewin. He stepped on the gas pedal from the first minute and never let up over three rounds to score a clear-cut unanimous decision.

It was an overwhelming display against the 2019 Breakout Fighter of the Year who was a natural lightweight and in pole position for a championship crack.

“When my back is against the wall, I shine and prove my doubters wrong,” he said.

Everything has gone his way in 2020, including his life outside the cage. Most recently, he tied the knot with his partner Stephanie Rebagoda in a civil wedding nearly a month ago.

“2020 has been great for my career and personal life. I know this year has been difficult for a lot of people, but let this be a reminder to never give up in the face of adversity. Challenges are made to make us grow and strong. Just hang in there and keep on fighting,” Dy shared.

After adding the 2020 Fighter of the Year award to his trophy room, Dy has now set his sights on Amin Ayoub’s BRAVE CF lightweight world championship.

“Anytime, anywhere, I am ready to suit up and fight. Just give me the time and date. I promise you that I’ll be there,” he declared.

12       12SharesThis post has already been read 385 times!The ongoing negotiations between the members of the city’s Public Private Partnership for