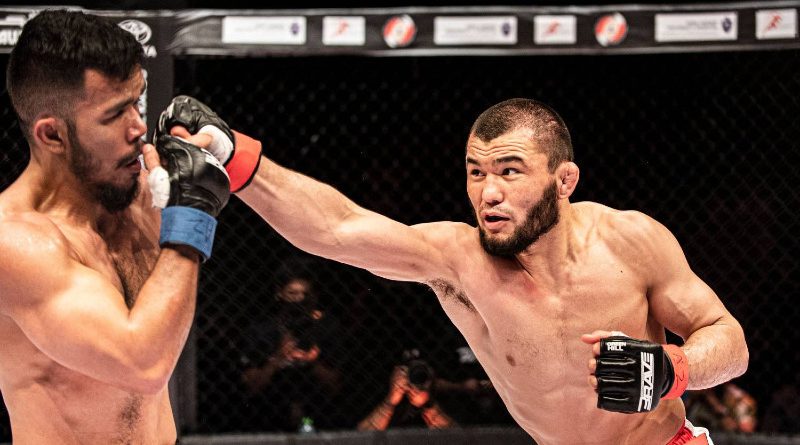 Filipino BRAVE campaigners Rolando Dy and Jenel “The Demolition Man” Lausa could not their acts going during Brave CF 47: Asian Domination in Seef, Bahrain as they succumbed to their respective opponents from Kyrgyzstan on March 12, 2021.

Dy, who is bidding to earn a spot in a championship fight for the Brave lightweight title, saw his two bout winning streak halted by a grappling masterpiece of Abdisalam Kubanychbek in the night’s main event.

Kubanychbek showed his dominance on the mat, taking Dy down multiple times and delivered damaging ground and pound that forced Dy’s corner to throw the towel prior to the start of the third round.

Dy’s bid to become the next Filipino to reign as BRAVE champion after Stephen Loman vacated the bantamwieght title in jumping ship to ONE suffered a huge setback as the fight served as an eliminator to determine Amin Ayoub’s next challenger for the lightweight title.

Kubanychbek went to work right in the opening round, taking Dy down towards the end and dished ground-and-pound to gain a decisive edge.

The 2020 Fighter of the Year started the second more weary of the Kyrgyzstan fighter’s takedowns but could not slow down “Omok”, who still got to control the pace of the match despite the Filipino’s heightened defense.

Kubanychbek repeated the first round sequence by forcing Dy to the mat again and dished more of his ground-and-pound hits.

The hits apparently did enough damage to force Dy shake his head in response of the third round’s opening bell, ending the fight into what was eventually ruled as a “corner stoppage” by the referee.

Kubanychbek was coming into the fight hot with back-to-back knockouts against João Paulo Rodrigues and Vagif Askerov, and a submission of Jahongir Saidjamolov last January.

Earlier in the card, Lausa’s BRAVE debut was spoiled by another Kyrgyz, Ryskulbek Ibraimov, who edged out the former UFC campaigner with a unanimous decision victory.

Lausa went on to his striking early but was could not land clean hits after being frustrated by multiple Ibraimov takedowns.

The undefeated professional boxer from Iloilo finally sneaked in a right hook to almost take out Ibraimov early into Round 3 but the Kyrgyzstan fighter recovered from the hit.

Later in the round, Ibraimov brilliantly executed another crucial takedown to secure the win.

Ibraimov improved his MMA career fight record to 19-8 while dropping Lausa to 7-6.

The loss also sends Lausa into a tailspin with a fourth straight loss dating back to 2017, three of them under the UFC banner.