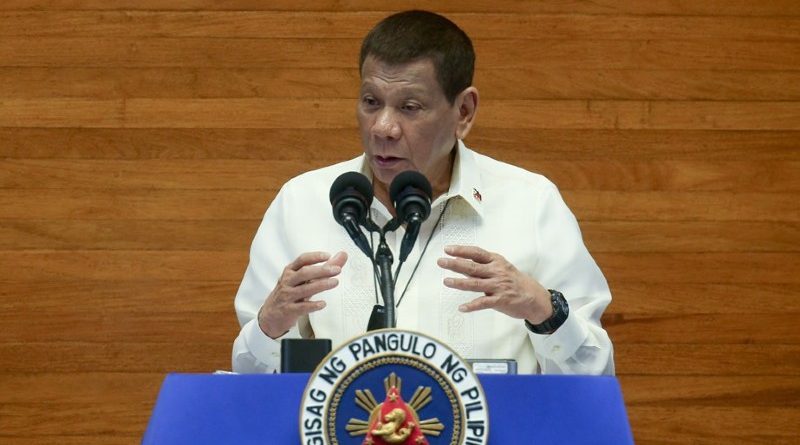 President Rodrigo Duterte on Monday praised the legislative accomplishments of the Philippine Congress during his last State of the Nation Address.

Duterte praised lawmakers for working closely with the Executive Branch and for passing his priority measures in the past five years.

Most of the legislative achievements that Duterte mentioned were either filed by former Speaker Alan Peter Cayetano, who was his running mate in 2016, or enacted during the latter’s term as the head honcho of the House of Representatives.

Duterte began his address by praising Congress’ success in increasing the salaries of military and uniformed personnel through the 2020 General Appropriations Act.

“In 2018, we raised the salaries of our military and uniformed policemen and personnel to a level commensurate to the critical role they play in upholding national security and maintaining order,” he said.

Duterte also thanked Congress for the passage of Bayanihan 1 and 2, dubbed as the biggest social amelioration program the country had ever undertaken.

Bayanihan 1 granted the President vast emergency powers, including the reallocation, realignment, and reprogramming of around P275 million, for pandemic response.

Bayanihan 2, on the other hand, sought to stimulate the economy by providing assistance to several essential sectors and industries while strengthening the country’s public health system.

Other laws mentioned during the address were the Coco Levy Law and Salary Standardization Law.

Signed on February 26, 2021, the Coco Levy Law established a trust fund for coconut farmers and mandated the creation of a Coconut Farmers in Industry Development Plan.

“Fulfilling my promise to our coconut farmers and the Filipino people, my administration has worked with Congress to pass the Coconut Farmers and Industry Trust Fund Act. We have returned also the Coco Levy funds to its true and rightful owners – our coconut farmers,” Duterte said.

The Salary Standardization Law, signed on January 8, 2020, increased the salary of around 1.4 million government employees.

“We also ensured the modification of the Salary Schedule for Civilian Government Personnel through the Salary Standardization Law 5, a necessary measure for our civil servants to recognize their work and accomplishments as well as a gesture of gratitude and good will,” Duterte said.

During his speech, the President urged lawmakers to pass measures establishing the Department of Disaster Resilience as well as amendments to the Foreign Investments Act and Public Service Act.

The Department of Disaster Resilience Bill, which was filed by his former running mate Cayetano, has yet to be approved in the Senate.

Aside from Congress’ legislative accomplishments, Duterte highlighted programs for the protection and welfare of overseas Filipino workers.

The President touted the extension of the validity of Philippine passports to 10 years, saying this has lessened the burden on international travelers and overseas workers.

The extension of passport validity from the previous five-year renewal period was one of the reforms pushed for by Cayetano during his stint as head of the Department of Foreign Affairs (DFA).

In a nod to overseas workers in the Middle East, President Duterte threatened to repatriate OFWs in the region if governments there do not dismantle the Kafala system, which he likened to modern-day slavery.

“Either you wreck it or we will ask our workers, Filipino workers, to go home. Sabi ko ‘bahala na, kung mahirap lang kami dito, OK lang.’ We will try our very best to make up for what they have lost, what they will lose in the process but we will never allow them to be slaves,” he said.

(Either you wreck it or we will ask our workers, Filipino workers, to go home. I said to them, ‘whatever happens, if we remain poor, it’s OK.’ We will try our very best to make up for what they have lost, what they will lose in the process but we will never allow them to be slaves.)

The arrangement requires migrant workers to have a sponsor in their destination country to obtain visas and work permits, giving employers significant control over the employment and migration status of visiting laborers.

In 2017, during Cayetano’s tenure as Foreign Affairs Secretary, the DFA led a multi-sectoral “anti-Kafala” campaign which led to the move by Saudi Arabia in March 2021 to remove the requirement for overseas workers to obtain permission from their employers to travel or change jobs.

Duterte also asked Congress to prioritize the passing of a bill creating the Department of Migrant Workers and Overseas Filipinos.

“Kailangan po ito (This is needed) because they are suffering,” the President said, adding that he has certified the legislation creating the new agency as urgent.

The Lower House passed its version of the bill under Cayetano’s term as Speaker. The Senate has yet to approve the measure. ###

This post has already been read 93 times!While waiting for action on the request for a stricter quarantine classification, Mayor