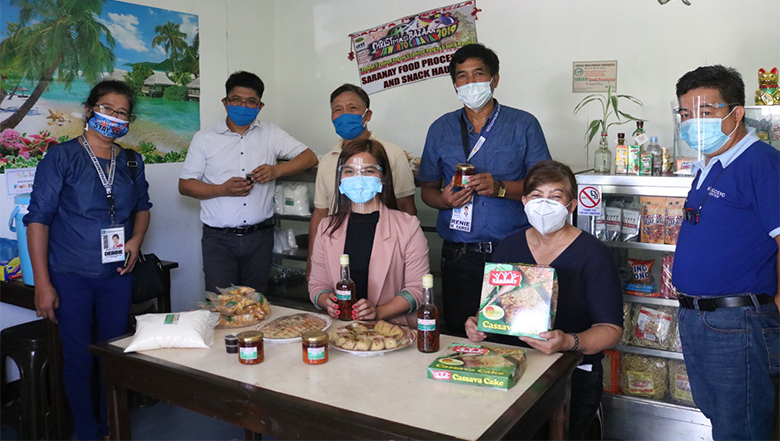 STA. MARCELA, Apayao—The Department of Trade and Industry -Apayao turned over the P800,000 worth of Shared Service Facility (SSF) machines, tools and equipment on cassava processing to Saranay Multi- Purpose Cooperative on Tuesday (August 11) in a simple ceremony held at Nueva, here.

Saranay MPC can now officially claim under their name the SSF after DTI Apayao conferred to them the ownership through a deed of donation following the cooperative’s six years of satisfactory productive usage.

In her message through Provincial Administrator Atty. Ma. Elena Teresa Ravelo, Governor Eleanor C. Bulut-Begtang acknowledged the role of the SSF in the upgrading of the products of the cooperative which eventually managed to help the people of Sta. Marcela. She also commended the efforts not only of DTI but also of other National Line Agencies like DOST, DA and DAR.

“The convergence of efforts and resources is what fueled the cooperative to grow into what it is today. I hope we could have more convergence projects like this as I believe this kind of programs are needed to create additional livelihood opportunities that would eventually reduce poverty incidence level in the province,”Gov. Leah stressed.

Gov. Leah urged other line agencies with similar livelihood programs to extend assistance to micro, small and medium enterprises. She then challenged the cooperative to continue what they have started, be more responsible in handling the facilities and expand their line of business so that the government shall be ready to assist in future endeavor.

The Saranay’s 29 years of existence along with its continued successful business enterprise is a concrete example of convergence between and among the different National Line Agencies and cooperative-beneficiaries which according to Atty. Ravelo is worthy of emulation taking into account that it could be replicated to other municipalities.

Apayao-DTI Director Renie Ramos has high hope that this kind of projects shall continue and would reach out for other cooperatives through the help of the Local Government Units and other line agencies. According to Ramos, the next target aside from cassava products is the pineapple of the Municipality of Pudtol.

Sta. Marcela Mayor Evelyn Martinez acknowledged the invaluable assistance of siblings Gov. Leah and Congressman Elias C. Bulut, Jr. to the cooperatives and  business enterprises of the province. She believes that there are more to come from the government as long as the cooperative shall maintain the good mark they have shown.

Meanwhile, Provincial Directors Debbie Manangkil of DOST and Artemio Dumaoang of DAR wherein their agencies have been instrumental in the provision of equipment and development of the quality products of the cooperative, assured their full backing committing to support community based enterprises.

It can be recalled that previously, the DAR, DA and DOST provided worth of millions to Saranay with variety of machines, tools and equipment, building and even working capital.

In return, Saranay Board of Director Ceferino Martinez, Jr. expressed their utmost gratitude and commit themselves to faithfully do their mandates. They hope they could improve further their products aimed to satisfy the general market.

PHOTO CAPTION: APAYAO DELICACIES. Sta. Marcela Mayor Evelyn Martinez and Provincial Administrator Atty. Ma. Elena Ravelo (seated from right to left, respectively) proudly display the local food products of Saranay Multi-Purpose Cooperative during the turn over ceremony of the cooperative’s shared service facility by DTI-Apayao. Provincial Directors Renie Ramos of DTI-Apayao, Engr. Debbie Manangkil of DOST and Artemio Dumaoang joined the gracing of the ceremony as all of these agencies had their own contribution to the cooperative. BY GERRIAHZON S. SEBASTIAN

This post has already been read 1094 times!The city is not yet inclined to open inter-regional public transportation to avoid