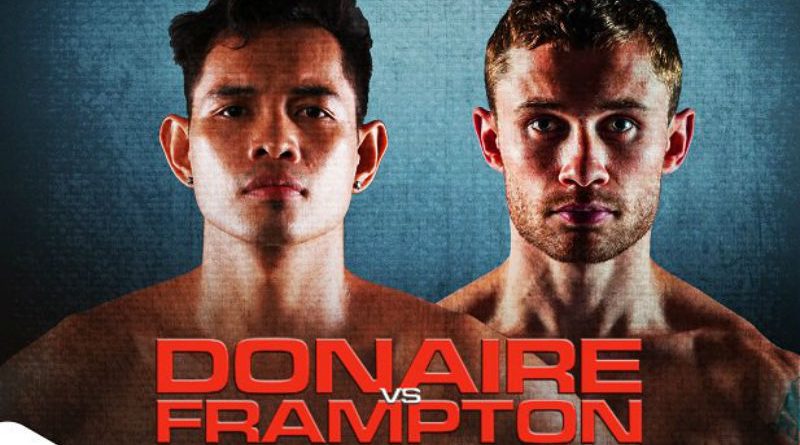 Former world boxing champion Nonito “The Filipino Flash” Donaire Jr. steps back on the ring tomorrow early morning, Philippine time, against a formidable opponent in what could be his last meaningful ride.

The Bohol native, who currently has a career fight record of 38-4, that includes 24 KOs , hopes to annex another world title when he goes head to head against Irishman Carl “The Jackal” Frampton for the interim World Boxing Organization (WBO) Featherweight division title in the Irishman’s own backyard at the SSE Arena in Belfast, Northern Ireland .

Boxing analyst Atty. Ed Tolentino said that this fight is make-or-break for Donaire. “Donaire is walking a tight rope. He is at the crossroads opposite Frampton in this fight. This could be the swan song if he loses,” he said. Despite being the underdog of the match there is still much to look forward to from the former five-time world champion.

Donaire started his career on a flash, losing only the second of his first 32 fights, to establish himself as one of the best pound-for-pound fighters in the world. His punctuation victory, a win over Mexican Jorge Arce, seemed to confirm his status as the apparent heir to Many Paquioa’s throne.

However, a unanimous decision defeat in his very next fight to Cuba’s Guillermo Rigondeaux on April 13, 2013, where he lost the WBO, The Ring, and lineal super bantamweight titles, seemed to send him to the start of a declining stage of a once great fighter.

Since that loss, Donaire seem to have trouble keeping up those wins against elite opposition, going “only” 7-2 that includes a loss to the unbeaten Jessie Magdaleno, who was carrying a 23-fight winning streak going into their fight, and the only stoppage defeat of his career to Nicolas Walters, who was then 24-0 when he stopped Donaire in the sixth round.

That goes the same in his win against Vic Darchinyan in their rematch where he was lagging behind in the judges’ scorecards, only to be bailed out by his power for the TKO win.

It’s this power, though, that still makes the 35-year old Donaire a fearsome opponent and should still be able to go up against the best the world can offer, even at his advancing age.

“Even as he gets older, Donaire is still extremely dangerous because of his one-punch power and excellent counterpunching skill,” confirmed Tolentino of the 2012 Fighter of the Year of the Boxing Writers Association of America (BWAA).

On the other hand, the 31-year old Frampton (24-1, 14 KOs), fondly called “The Jackal,” is a former world junior featherweight and featherweight champion, and holds a hometown advantage over the Filipino slugger.

“Frampton is a great athletic boxer with fast hand and packs serious power in his punches,” Tolentino said of the Irish fighter, who, like his foe was also touted as Fighter of the Year by the BWAA and The Ring magazine in 2016.

The analyst believes that if Donaire prevails over Frampton, he will be guaranteed at one last shot for glory against the reigning WBO champion Oscar Valdez from Mexico once the lynchpin heals from a broken jaw and resumes his reign.

SKY is making the fight available to its subscribers by SKY Sports Pay-Per-View on April 22 at 2:30 AM, with same day replays at 6 AM, 9:30 AM, 4 PM, and 7:30 PM. SKY also announced that SKY PPV subscribers may also watch these bonus content with their subscription: Donaire vs. Prado in Pinoy Pride 30, Donaire vs. Bedak, and “Flash Forward,” a documentary on the Pinoy fighter.

Subscribers can avail of the event on SKY to watch the match live, commercial-free on SKY Sports PPV for P199 on channels 159 (SD) and 259 (HD) for Mega Manila, channels 59 (SD) and 959 (HD) for select provincial areas, channel 42 (HD) for SKYdirect and via SKY On Demand. Visit mysky.com.ph/boxingppv for details of the event.