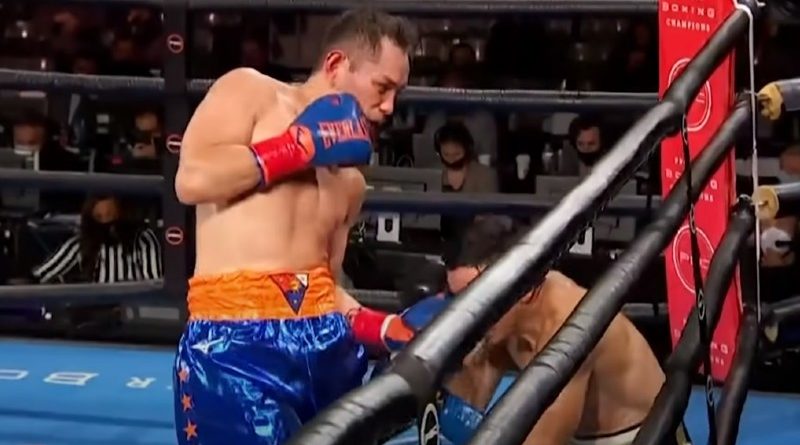 It was vintage Nonito Donaire again last night as he knocked out Nordine Oubaali to win the WBC bantamweight champion in Carson, California. The win made the 38-year-old Donaire became the oldest bantamweight to hold a title in boxing history. He also handed his rival the first loss of his career.

The fight was action-packed as Oubaali came with guns ablaze while Donaire was on point with his ducking and counter punching.  Oubaali, probably underestimating Donaire’s power, charged in and threw heavy leather but the “Filipino Flash” was an elusive target as he evaded majority of the power shots with head and body movement while perfectly timing to fire his vaunted left hook, catching an exposed Oubaali multiple times.

Donaire dropped Oubaali twice with left hooks in the third round, including one that was simultaneous with the bell, that merit twin standing eight counts. Referee Jack Reiss allowed the champion to continue each time but a Donaire left uppercut to the chin at 1:52 of the fourth sent the French-Moroccan to the canvass for a third time and put the outcome to no doubts as Reiss finally waved the fight off.

Donaire improved his fight record to 41-6, with 27 KOs. He now possessed the 118-pound title for a fourth time. He won the WBC, WBA and WBO versions previously. This is second reign as WBC champ in the division. This fight was his 9th consecutive fight with a title at stake.

The loss dropped Oubaali’s record to 17-1, with 12 KOs, He successfully defended his title twice since winning it in January 2019, during the Manny Pacquiao – Adrien Broner fight before running into Donaire.