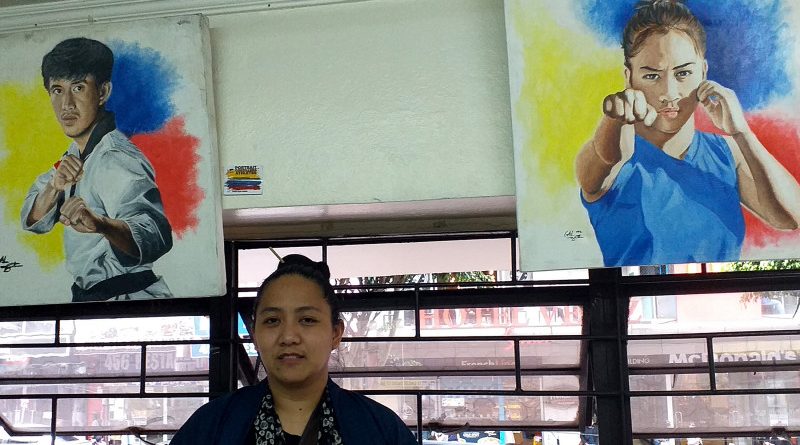 When taekwondo djin Jeordan Dominguez posted a photo to his Facebook story with him posing in front of an unfinished art work of himself at the Baguio Athletic Bowl, his inclusion to the Baguio Heroes Legends mural project of Gladys Anne Labsan has already been assured.

Dominguez thus joined wushu great Divine Wally at the walls. The seven by 14 feet walls of the dugouts under the long stage of the big grandstand will expectedly have 18 faces of sports greats in the city.

Labsan after the New Year, did Wally, one of the younger athletes who are yet active in service to the country.

Wally’s mural is also the first that will be shared with another athletes.

“I will be doing six other walls, once they are fixed, where two faces will be painted on each,” she said.

The Otucan, Bauko Mountain Province born Dominguez is the most accomplished taekwondo djin in the city and the region.

Dominguez, who trains thrice a day, won the World Poomsae Championships twice: 2014 in a team event and in 2016 for an individual event.

He also bagged the MVP award in Asian and World Championships last 2016. Dominguez was also named as Mr. Taekwondo in the 2017 Philippine Sports Awards. He won a gold medal in the last Southeast Asian Games.

Actually, Labsan is just taking a breather as she took on another mural project somewhere in Guisad.

“I have to take a break from my Heroes mural project to do this work at Kalinga,” she told this writer, referring to her new work at veterinary clinic along Ferguson Road in Guisad.

The 47 feet work, about pet owners and pets, was first offered to street artist Venazir Martinez, who begged off because of her ongoing projects.

“I was asked when she declined because of other commitments,” said Labsan.

Actually, Labsan did a mural, of a dog, at the pet clinic when it opened sometime two years ago.

“I have done a work for them and I was asked this time to do something big,” said Labsan, who dragged along brother Gian Awingan to assist her in the painting job.

Awingan is a photographer and videographer and has done some photoshoots of her at the athletic bowl project.

“But I will get back at the legends mural project once I finished this,” she added. Pigeon Lobien