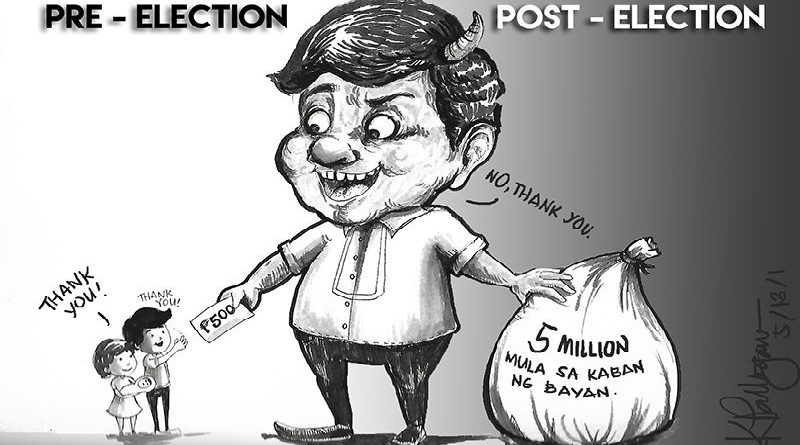 May 14, 2018 was another historic day for Filipinos. We elected our new set of barangay officials who will lead the over 42,000 barangays in our country in the next three years. This synchronized barangay and Sangguniang Kabataan (SK) elections was postponed from last October 2016 primarily to allow the government to reportedly clear the barangays from the alleged influence of drug lords that has nearly placed our country into a so-called narco-State. Unfortunately, the scheduled October 2017 synchronized barangay and SK elections was again re-scheduled to May 14, 2018 on claims of government that it was not able to complete its mission of clearing all the drug-affected barangays around the country and arresting barangay officials who are in cahoots with drug lords.

The House of Representatives attempted to make a last ditch effort to postpone for the third time these elections but the Senate failed to enact a counterpart bill before Congress went on a prolonged break. Surely, there were numerous expectant barangay officials who had been longing for the resetting of the barangay and SK elections but there are far more people who are interested that the elections will push through so they can either give incumbent barangay officials a fresh mandate or replace them with deserving ones.

Candidates have developed various forms of campaigning to convince their constituents to remember and vote for them on election day. Elections in our country have always been pledging sessions as politicians, old and new, commit to high heavens what they want to do to improve the state of their locality even making unrealistic promises that turn out unfulfilled once they assume office until they complete their terms in public office. Some politicians bank on their influence to win the votes of their constituents, while some of them rely on their money to be able to land in an elective position not only in the barangay level but also in higher levels of the bureaucracy.

Under the present set up of government, barangays are the smallest political subdivision with the Punong Barangay empowered to perform the duties and responsibilities of the executive branch of government being the chief executive officer, the legislative branch being the presiding officer of the barangay council and the judiciary being the chairperson of the Lupong Tagapamayapa.

We are fed up with frequently broken promises and we are tempted to embrace change in our society because we want leaders who walk the talk. We should have done soul-searching ourselves: do we really want our barangay and SK leaders to be committed to a pro-people, pro-environment, pro-human rights, and pro-future generation agenda?  Are we willing to give up our own personal interest, especially if we are relatives, supporters and sponsors, of using these officials for our own benefit only even if it violates other people’s rights? Are we willing to stand with head high not to get that wad of money to buy our votes? Are we willing to stand up to our own rights and those of others who are oppressed against our officials? Are we willing to monitor and correct and/or report actions of officials which violate the law, or when they do not do their jobs? Change can only come if they ourselves make the wilful decision to bring about the change within ourselves first.

For those we intend to vote, did we ask the following questions: have they demonstrated honesty in their work? Have they demonstrated an attitude that is open to constructive criticism and dialogue? Do they set-up a mechanism for community consultation before they decide on matters that affect us?  Do they promote public accounting where the budget and the expenses are openly discussed in community meetings? Have they demonstrated knowledge of their mandate, for ignorance of the law is no excuse for incompetence? Have they shown favor for their relatives, friends and supporters only, because we must remember that the officials are serving the whole constituency and not only those they choose to? Have they demonstrated fairness and wisdom that unites the community instead of dividing us? These are just markers that should have guide us in choosing our officials who shall SERVE us for the next three years.

Finally, did we always keep in mind that the money of the barangay is our money. These officials are paid by us and are in their positions to serve us. They are paid to work so it is our obligation to monitor their performance and evaluate if they are exercising their mandates properly. The final responsibility for making these officials work was in our hands. Let us not end our participation with the casting of our votes but in following through whoever wins that they perform according to standards set by law.