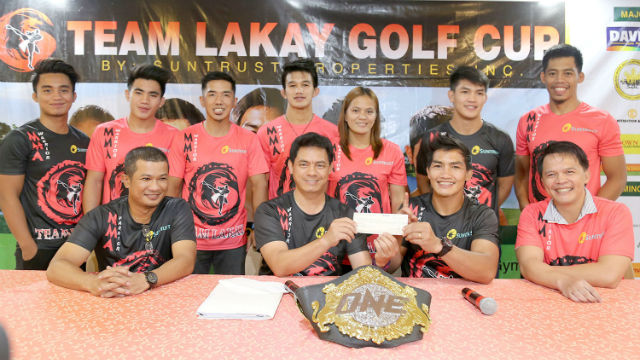 BAGUIO CITY – The management of Suntrust Properties, Incorporated recently turned over to Team Lakay stalwart Eduard Folayang a check worth P567,718.50 to help aggressively promote Mixed Martial Arts (MMA) in the grassroots level and to discover upcoming talents in the sport where Cordillerans have actually excelled through the years.

The amount, which was turned over by Suntrust President Atty. Harrison Paltogan, came from the proceeds of the Golf for A Cause sponsored by the company purposely to sustain the upliftment of MMA in the region and to inspire the younger generations to embrace the sport that will surely bring them to greater heights in the future.

The bond between Suntrust and Eduard Folayang is a tale of friendship that started several months ago when Folayang was introduced to Paltongan by some friends from the Mountain Province. At that time, Folayang and Team Lakay were looking for financial support for their upcoming fights in April. In particular, Folayang was then set to fight Ev Ting for the ONE Lightweight World Championship on April 21, 2017. Paltongan immediately expressed his willingness to help.

From that time on, Suntrust and Atty. Paltongan, in his personal capacity, have been fully supporting Eduard and the entire Team Lakay as they embody the ideals of humility, hardwork, discipline, teamwork, and excellence – the same values being advocated by the company.

As a native of the Mountain Province himself, Paltongan fully supports endeavors for the youth of Cordilleras especially those involving education and sports. The same ideal is shared by Suntrust, the company he leads. Paltongan believes encouraging the young to engage in various sports discipline including mixed martial arts would lead them away from drugs, smoking, drinking, and other vices which are getting more prevalent also in the highlands.

Paltongan said he saw in Folayang a lot of similar things in their childhood including wood picking and daily miles of walk along the valleys and rivers going to school. They were both exposed to the simplicity of life and the joy that goes with it, the pains of poverty, and the many lessons of humility. He said he wanted people to learn and be inspired more about Folayang’s life and positive character.

Folayang expressed his personal gratitude for the overwhelming support of Suntrust and its contractors, especially his fellow Igorot, Paltongan. Folayang said he is very proud of his Suntrust Family – a company he admires for its culture of humility, teamwork, and malasakit. He said he developed a personal relationship with the people of Suntrust who warmly welcome him every time he visits the company. He said Suntrust is much more than a sponsor, rather he considers it a family who genuinely treats him as a son.

Folayang also said he is very thankful Suntrust is helping them a lot in promoting sports including MMA especially in the Cordilleras. He hopes more of his fellow highlanders especially the youth will be more interested in sports instead of being idle or involved in drugs and other vices.

Folayang said he grew in a tough and rugged environment just like Paltongan. He believes what they went through molded them well, their character, and values especially those of hardwork, discipline, and humility.

Folayang said that the more than half a million peso handed out to him and the rest of the Team Lakay members by a real estate developer would go to the upgrade of their gymnasium now based in La Trinidad.

“Not only that, but this could be the start of our own gym,” Folayang said during a presscon last June 7 at the Baguio Country Club.

“I hope they use this to buy some equipment, enhance their training and inspire other youth,” said Paltongan. He said that he was persuaded to support Team Lakay because they can be models for Cordillera youth.

“This fund will support not only the Cordillerans but the whole Philippines,” said Sangiao.

“As a native of the Mountain Province myself, I fully support the endeavor for the youth of Cordilleras especially those involving education and sports,” Paltongan said. He said that Folayang went to a Suntrust event to deliver a speech and Paltongan said he was moved with the MMA warrior’s story.

This post has already been read 964 times!TABUK CITY, Kalinga – With the voter’s registration extended, the Commission on Elections