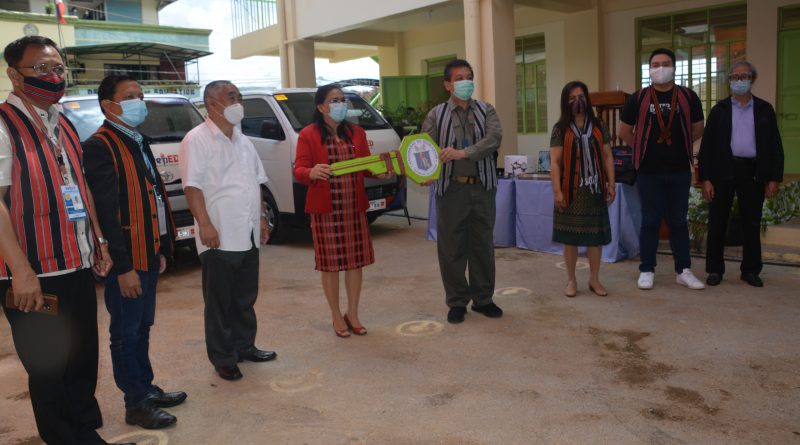 LA TRINIDAD, Benguet– The education department formally turned over to the regional and different division offices several units of service vehicles laptop computers and drones to help in improving the mobility of personnel in their areas of jurisdiction and improve the services being rendered by the agency to their clients in the grassroots level.

Education Undersecretary for Administration Alain Del B. Pascua led the turnover of the 8 pickups, 8 passenger vans, 64 laptop computers and 2 drones to the regional and division officials of the agency during the simple turnover rites held at the Benguet SPED Center in Wangal, here, Thursday.

He explained that the vehicles were purchased by the agency early this year and the same were supposed to be distributed to the different division offices but such activity was overtaken by the implementation of the community quarantine because of the ongoing battle against the spread of the dreaded Coronavirus Disease 2019 (COVID-19).

The education official disclosed that the pickups should be used by the engineers assigned in the division offices to inspect proposed and ongoing projects in the remote areas while the passenger vans will be used by the division heads and personnel, especially in the distribution of the printed modules to the different pickup points and for the retrieval of the same.\

On the other hand, Undersecretary Pascua stipulated that the laptop computers will be used by the youth coordinators, planning officers and disaster risk reduction and management officers while the additional laptop computers for the heads of offices and other key personnel will be arriving early next year.

In the case of the drones, he said that it will be used by the regional and the division offices for disaster risk reduction and management-related activities among other similar activities geared towards improving the delivery of the agency’s services to their clients, especially the students and the teachers in the remote communities of the region.

According to him, the laptop computers that are being given to the different regional, city and provincial education officials are separate from the similar units of equipment that had been given out to the teachers prior to the opening of classes.

Aside from turning over the service vehicles and units of equipment to the different education officials assigned in various parts of the region, Undersecretary Pascua also led the inauguration of a 3-storey Gabaldon building that was constructed within the compound of the Benguet SPED Center to serve as an added boost in providing additional classrooms for students once fact to face learning will resume.

The Undersecretary underscored that the education department continues to monitor the needs of the regional, division, district offices and schools around the country and that efforts are being done to closely coordinate with Benguet Caretaker Congressman and Anti-Crime and Terrorism through Community Involvement and Support (ACT-CIS) Party-list Rep. Eric Go Yap to ensure that there will be adequate budget that could be provided to the agency to support the full implementation of blended learning in both the urban and rural areas around the archipelago. By HENT

This post has already been read 17405 times!…if they played under 1998 rules and style. Sorry, Draymond Green. Yeah, you