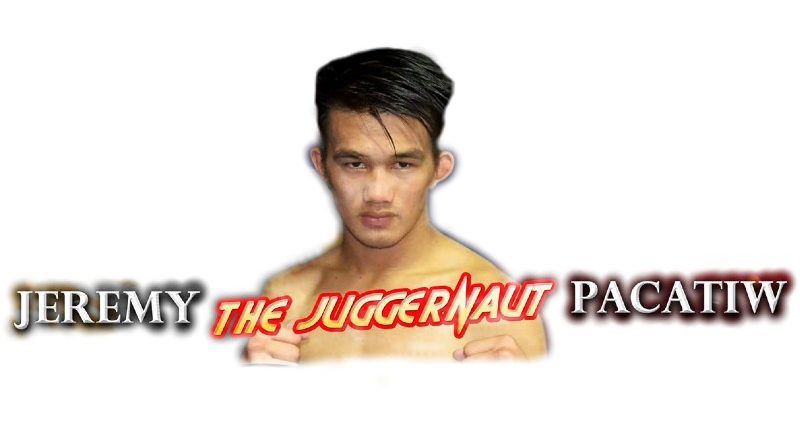 Pacatiw is motivated to leave a lasting impression and prove that like his stablemates, he is here to stay when he steps into the ONE Circle for the first time.

See story: Folayang, Pacatiw to see action in ONE: Battleground

The 25-year-old ONE newcomer is coming in with immense promise, evidenced by his previous performances that made him one of the most intriguing young talents to join the ONE family.

But Pacatiw also said he has improved ten-fold, stating that the version coming to ONE Championship is a finer fighter than the one the public last saw.

“I’ll say now that they will see a different breed of Jeremy Pacatiw, a much better version of me. I am very, very much excited for my debut. I believe we have everything set for this fight,” he said, upbeat of his chances as he has tirelessly trained with coach Mark Sangiao months before his ONE signing became public last June.

Pacatiw is ecstatic for the new chapter of his career as he takes on all comers with his fellow Team Lakay peers by his side, especially the senior ones from whom he got valuable reminders and insights ahead of his debut.

“I just stay focused. I don’t really feel pressured because that’s what they reminded me of. The most important thing in my mind right now is to win, and that’s it,” he said.

Of the Team Lakay manongs [elder brothers] Pacatiw has gotten advice from, he treasures words from Kevin “The Silencer” Belingon the most.

After all, Belingon has been at the peak of the division, once holding the ONE Bantamweight World Championship after topping Bibiano “The Flash” Fernandes with a split decision win on November 2018.

“Manong Kevin told me I should give my all in the fight. He also reminded me to stay focused on the match all the time and not get distracted by anything that’s happening outside of the cage,” he said.

His first fight is truly a golden opportunity for Pacatiw to introduce himself and show that the next generation of Team Lakay is ready to seize the spotlight. He joins the next wave of Igorot fighters who are doing so fine in ONE led by reigning strawweight king Joshua Pacio, Danny Kingad, Lito Adiwang, as well as fellow ONE newcomers Stephen “The Sniper” Loman, Jenelyn Olsim, and Jhanlo Mark Sangiao, who are also trying to carve a name for themselves.

He is also aware of the decorated history Team Lakay has established in the promotion and wants to use it as an inspiration to be able to deliver a memorable fight in his first taste of action in ONE.

Pacatiw, however, is leaving no stones unturned.

As much focus as he has on his personal development, he and Sangiao have also crafted a potent gameplan against Chen Rui, scouting the competition and pinpointing weaknesses he can exploit.

“I watched his fights and I saw my advantages as well as my disadvantages against him,” stated Pacatiw, not losing sight of the hunger the Chinese fighter will have heading into this duel coming from a third round knockout loss in his last fight and incurring two defeats in his last four fights.

For Pacatiw, that only makes his opponent all the more dangerous. “In MMA, anything can happen. It could be a knockout, a submission, or a decision, so we really don’t know what can happen.” he said.

Yet there’s no question of what he’s gunning for in this match — a definitive finish which should propel his stock on his way to be considered as one of the next contenders for the ONE Bantamweight World Championship.

He is also aware of the magnitude his debut match can mean for his career. “This match is so huge for me that it’s a must that I win this. Everything else will follow. Every fight that I win will lead me closer to the top and eventually, becoming a champion at ONE. But my focus is here, and we’ve prepared well for this fight”, Pacatiw ended.

5       5SharesThis post has already been read 4424 times!The city is looking for a private entity that is willing to partner