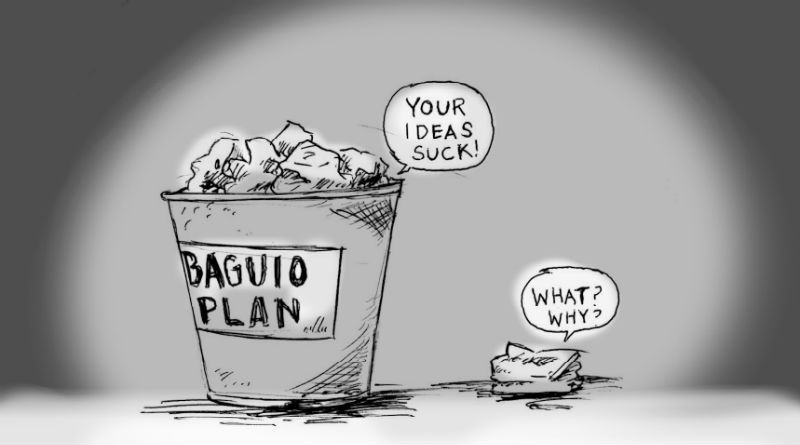 Baguio City, one of the fastest growing urban centers in the country, has been experiencing numerous problems due to the rapid in-migration due to a perceived stable economy that offers sustainable sources of livelihood for people. The primary reason people from the countryside go to the urban centers like Baguio City is the availability of jobs. After the destruction of the intensity 7.9 July 16, 1990 killer earthquake, no one expected Baguio will rise from the rubbles of a traumatic natural disaster that nearly ruined the city. Thanks to the emergence of passionate, dedicated and committed leaders and the residents themselves, Baguio rose from the rubbles to what it is now – a city with its urbanisation problems.

When the city was in disarray, it was an opportunity for the city to redefine its development scenario, including limiting the heights of buildings. The few years of recovery seemed Baguio was really going into low-impact development with cautious investments coming in. Investors established their various businesses in the city that slowly resulted to it becoming one of the preferred tourist destinations.

However, in the last decade, it seems that Baguio, despite the lessons from the earthquake, has gone into high-impact development that does not at all consider the carrying capacity of the city. Just looking at the garbage generated from the households and businesses in the city shows a situation that the enticements for visits to the city does not match the capacity to deal with attendant issues like garbage and traffic, and pronouncements from the city’s leadership always point to these issues tainting the image of the city as a tourist destination. In the first place, the lack of a comprehensive development plan to sell the city to the world as a preferred destination must take into consideration garbage and traffic management.

Baguio City’s garbage woes started in 2007 that forced the local government to opt for the hauling of its residual waste outside the city which is the most doable solution to prevent the a garbage crisis. This was aggravated by the issuance of the writ of kalikasan against the continuous use of the 5.2-hectare Irisan dumpsite following the August 28, 212 tragic trash slide. The continuous influx of people, either as tourists or to establish residence, translates to increased volume of motor vehicles, a the major cause of monstrous traffic congestions around major roads in the central business district and those streets leading to the different tourist destinations around the city. Motor vehicles continue to increase but business establishments previously mandated to designate parking spaces in their structures started converting the same to commercial spaces that caused the rampant illegal parking along roads and even in streets in the different barangays. The city’s limited land area aggravated by the hard-headedness of the people in complying with the implementation of programs, projects and activities geared towards improving the city’s current predicament is now taking its toll against the very people who claim to be the ones that love the city.

The local government crafted the necessary plans and programs to partially address the city’s current woes but the same was met with vehement opposition from various sectors and stakeholders. This only shows the need to have a comprehensive multi-stakeholder engagement, with the city government ready to listen to its constituency and accept non-economic benefits.  The current set of local officials have the difficulty of getting their acts together because of political differences being fueled by various sectors that result to deadlocks in what are supposed to be the doable solutions to the city’s major problems.

The city has a very well-informed constituency with diverse experiences and expertise and they must be meaningfully included in city planning. Meeting the needs of the poor need is not be elitist because in the end, we are all living in one space and our well-being is a collective concern. We are all pilgrims passing through and what we pass on to the next generation must be better than what we have.

The city, not only the city government, must have elite goals and these are articulated in the Sustainable Development Goals which must be met by 2030, in particular Goal 11 – make cities inclusive, safe, resilient and sustainable.  The Philippine Development Plan 2017-2022 has translated this into “Building Safe and Secure Communities” that by 2022, Filipinos will have access to affordable, adequate, safe, and secure housing in well-planned communities; “Ensuring Ecological Integrity, Clean and Healthy Environment” that by 2022, the country will be cleaner and greener, with the quality of life of communities significantly improved, including enhancing green spaces in urban areas. The local government must translate these strategies into plans, programs, projects and activities. If it has to be rigid in enforcing policies that promote the overall well-being of its constituency, then so be it. In governance of communities, it bodes well for the leadership to engage its constituency in a manner that the best ideas are surfaced and the commitment of each sector of the constituency is generated. 2022 is near for the city to demonstrate its achievement towards the Plan. It has 11 years to do that for the Goals. We should take these as serious commitments. We cannot pass our failure to the next generation. It might already be too late.