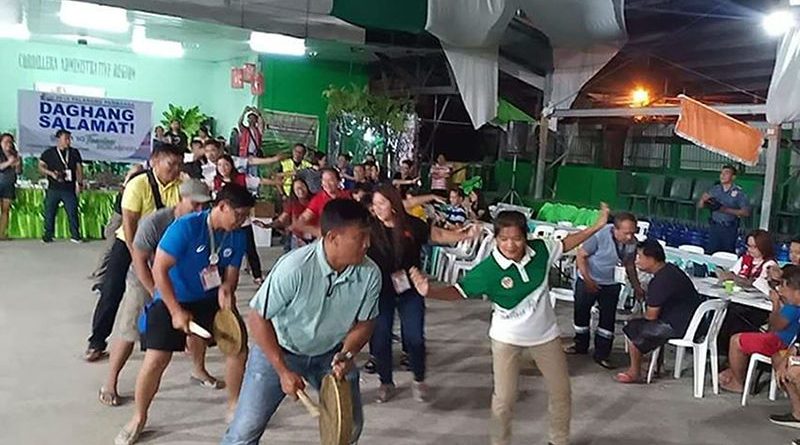 DAVAO City – The Igorot community in Davao celebrated with the coaches, chaperones, and athletes who are contingents of the Cordillera Administrative Region in the Palarong Pambansa 2019 during the solidarity night held jointly by Department of Education – Cordillera Office (DepEd-CAR) and Cordillera Mindanao (CORMINDA) on the evening of May 2, 2019, at Kapitan Tomas Monteverde Elementary School, Ponciano Street, here.

The supposed potluck dinner where the CAR contingent were billeted, turned into a mini festival as the Igorots danced to the sound of gongs that reverberated in the gym of the school as a way of celebrating the victory of some contingents,  the solidarity of the Igorots, and the support shown by Igorots to their fellow.

The week was also a showing that the visiting contingent was not alone during the Palarong Pambansa as the Igorots who migrated and are now living in Mindanao showed their support to their Kailians ranging from cheering in some of their games to visiting their billeting area and boosted the contingents’ morale.

Retired Colonel Fidel Francis B. Pumihic, the Vice President and one of the elders of CORMINDA, expressed his happiness on the show of solidarity culture by the Igorot community and the contingents.

“Our culture of solidarity lives on even if we migrated here in Mindanao. The participation of our Kababayan in the Palarong Pambansa brought us back home in Cordillera and we reciprocated it by making them also feel at home,” Pumihic said.

The Davao Igorots were welcomed by the contingents led by their Head Delegation, Agustin Gumawang.

CORMINDA is an organization of Igorots in Mindanao organized five years ago in Davao City to continuously ignite the love of the Igorots to their culture and sustain their solidarity although away from home.

There are about 260 registered members of the organization mostly from Tagum City,  Davao City, Davao Del Sur and Kabacan North Cotabato, although there are probably more who are not register yet but had been joining the group’s activities. Most of these unregistered ones are Igorots who migrated in Bukidnon, Compostela Valley and South Cotabato

The group’s membership is not limited to those who migrated in Mindanao. It is also opening its doors to those who are temporarily working or deployed there like government workers, soldiers and policemen.

By: Ezra L. Balagtey. (Ezra is an officer, Lt. Col., of the Philippine Army assigned in Mindanao. He married his wife in Davao City and his family is presently residing there. He is the designated information officer of the group)