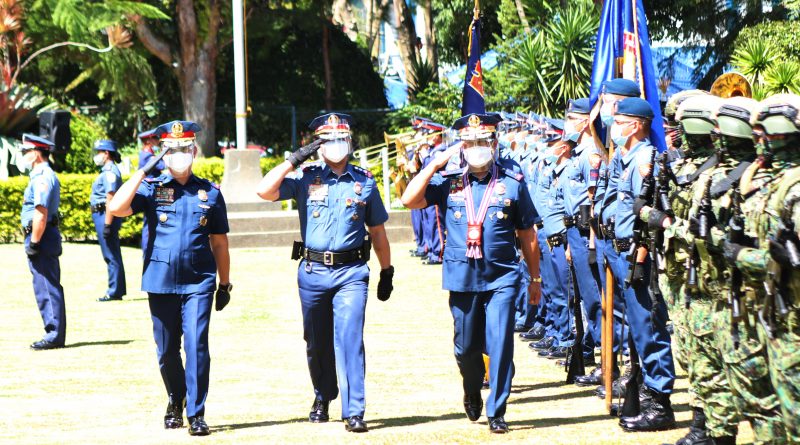 CAMP BADO DANGWA, LA TRINIDAD, Benguet – The Chief, PNP led the recital of the denunciation of Surrendered CTG/MB members to the CPP/NPA, the burning of marijuana plants and the blessing of the Maringal Hall with AVP during his visit in his hometown.

The CPP/NPA couple recited the denunciation of membership to CPP-NPA with the Chief PNP. The couple with 8 months old son surrendered with firearm and explosives on October 15, 2020 at Bargy Karikitan, Conner, Apayao Province. Alias Michael is listed no. M8 while alias Gian was listed no. M23, both members of the Komiteng Larangang Gerilya South Ilocos Sur (KLG-SIS), Iloco-Cordillera Regional Committee (ICRC) of the CPP-NPA.

They choose to abandon the armed struggle due to the hardship they experienced in the underground movement, various limitations, lack of food, to clear their names to the authorities and most of all to live peacefully with their son.

From 2018 to date, a total of 256 CTG and MB members and supporters composed of 92 regular CTG members, 139 Militia ng Bayan, and 25 CTG supporters has surrendered to the government.

Moreover, 74 assorted firearms and crew served weapons surrendered by CTGs were presented.  Of the 73, Mountain Province PPO recorded the most number with 32 firearms; followed by Kalinga PPO with 20; RCLO PROCOR of Benguet PPO with 12; Abra PPO with 7; and the least Ifugao PPO with only 2 firearms. This event is a manifestation of the CTG’s sincerity in returning to the folds of the law.

For the ceremonial burning of marijuana plants, a total of 164,468.7775 grams of marijuana plants amounting to P19,738,414.3 a representation of the voluminous eradicated marijuana was torched by the CPNP, assisted by the  RD PROCOR and the Acting Regional Director of PDEA-CAR.  These were the pieces of evidence for the cases filed from various courts in Baguio City, Benguet and Mt Province. A total of 7 of these cases were already decided while 2 are still pending.

As part of the 9-Point Agenda of the CPNP on Facilities and Development, the Maringa Hall with AVP on PROCOR Decongestion building was blessed, inaugurated and unveiled by the CPNP. The more than P3.3 Million building was constructed on March 6 last year and was just completed last month September 19.  (PROCOR RPIO)

This post has already been read 1372 times!BAUKO, Mountain Province – Surviving signatories to the Mount Data peace agreement and