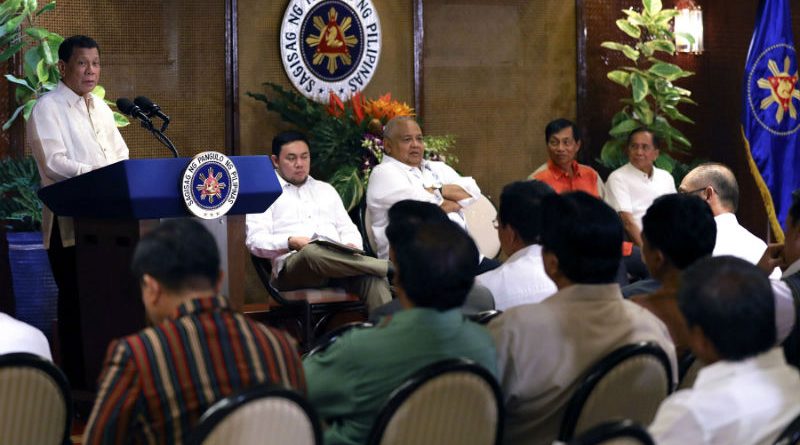 BAGUIO CITY – President Rodrigo R. Duterte agreed to certify House Bill (HB) 5343 or the bill that seeks the establishment of an autonomous region in the Cordillera as an urgent administration measure side by side with the proposed enhanced Bangsamoro autonomous region bill for appropriate action by the members of the 17 Congress.

Speaking before the over 120 Cordillera leaders that attended the scheduled meeting with the Chief Executive Tuesday night at the Malacanang Palace, the President recognized the need for the devolution of more powers of the national government to the local government units, including the autonomous regions to be established, the greater control of resources by the host communities, the implementation of more development projects in the countryside to ensure that the people will reap the fruits of genuine development and for them not to be left behind in terms of growth and development.

However, he said the control and supervision of one armed forces and the police will remain with the national government so as not to create serious repercussions to the overall security of the archipelago from internal and external forces wanting to ruin the stability of the nation.

Further, President Duterte assured the Cordillera leaders that he will allocate 2 slots for the region in the composition of the consultative commission that he will be creating for the charter change that will pave the way for the shift from the existing unitary form to federal form of government.

The meeting of cordillera leaders with the President was worked out by officials and members of the Regional Development Council (RDC) in the Cordillera through the persistence of Presidential Adviser on the Peace Process Jesus G. Dureza for the inclusion of the proposed Cordillera autonomy bill in the matters that will be certified by the President as urgent for the appropriate action of Congress.

Mayor Domogan presented the issues and concerns that needs the intervention of the President and emphasized the need for the certification of HB 5343 as an urgent administration measure while expressing the individual and collective gratitude of the cordillera leaders to President Duterte for giving them the chance to meet with him to air their sentiments that they are now unified for the region’s renewed quest for autonomy.