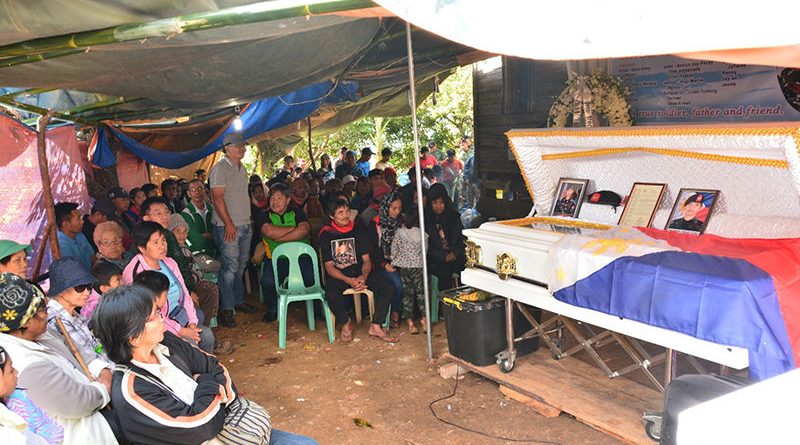 BAGUIO CITY  – Six soldiers and policemen from the Cordillera region who were deployed to the battle zone during the 5-month Marawi siege but were unfortunately killed are set to receive government support coming from the Presidential Special Fund pursuant to existing laws, rules and regulations relative to the grant of the necessary benefits to them.

This was revealed by National Capital Region Police Office Spokesperson Police Chief Inspector Kimberly Molitas who explained that, what happens to the troops who were Killed-In-Action (KIA) or were injured in the Marawi siege is for their families to immediately avail of the Presidential Special Fund which is used to provide their basic needs such as medical and funeral assistance, aside from assistance to the immediate families while their benefits are being processed for release to their beneficiaries.

Based on the latest count, 165 policemen and soldiers were listed as KIA while 1,700 troops were injured during the five-month conflict in Marawi City which officially ended last October 23, 2017.

Molitas, who hails from Kibungan, Benguet, noted the gallantry of the Cordillera warriors both in the PNP and AFP who gave the ultimate sacrifice in war-torn Marawi during the hostilities with the affiliates of the Islamic State of Iraq and Syria (ISIS).

“Most of our troops from the PNP and AFP come from the Cordillera, particularly those in the Special Action Force. This really shows the heart of the Cordilleran through our troops but although we mourn for our troops, we also celebrate the lives of our colleagues who sacrificed their lives in the name of peace,” said the spokeswoman.

She added, although this is a very hard time for us both in the PNP and AFP, this is the sacrifice we need to do for peace in Marawi and for the stability of the whole nation.

Molitas, who was in the city, was invited as a resource person for the security pillar of ASEAN 2017 which focuses on trans-national crime including the illegal drug trade and the trafficking of people from all walks of life.

Meanwhile, aside from the dead and injured servicemen, Joint Task Force Group Ranao Deputy Commander Colonel Romeo Brawner Jr. listed 962 Maute-ISIS killed, 1,780 civilians rescued by the AFP and PNP, 47 civilians killed by the Maute, and 864 firearms recovered at the end of the Marawi siege.

The 5-month Marawi siege broke out when the ISIS-inspired Maute terrorists tried to establish their own state in the Muslim-dominated city right in the heart of Lanao del sur.