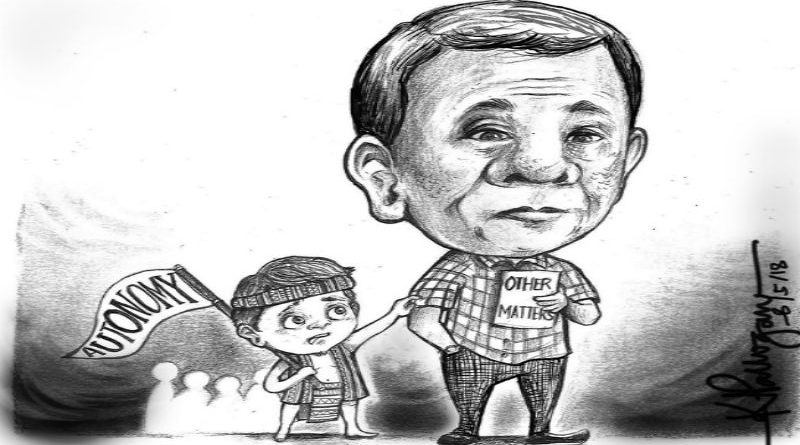 TABUK CITY, Kalinga– A number of Cordillera lawmakers are keeping their fingers crossed that President Rodrigo Duterte might include his support to the region’s undying quest for autonomy in his fifth State of the National Address (SONA) that he will personally deliver before the Filipino people on Monday, July 27, 2020.

Rep. Allen Jesse C. Mangaoang said that Cordillera lawmakers will not give up in reiterating to the President for his to include in his annual SONA the region’s quest for autonomy similar to what he had been doing to the Bangsamoro Organic Law (BOL) that was passed and paved the way for the establishment of the Bangsamoro Autonomous Region of Muslim Mindanao (BARMM) which is now doing good.

He added that if the President will not be able to include in his SONA his support to the region’s autonomy bid, lawmakers are urging the President to certify House Bill (HB) 5687 and Senate Bill (SB) 1232 pending in both chambers of Congress that seek for the establishment of the Autonomous Region in the Cordillera (ARC) for the completion of the government’s peace and development commitments in the north since the realization of the BARMM achieved the government’s peace and development goal in the south.

Mangaoang claimed that the concerned local governments and the various sectors in the region have already signified their support to the region’s quest for autonomy and that the third attempt in achieving self-governance could already make the different and put an end to the decades of struggle for self-rule.

According to him, lawmakers from the different parts of the country also signified their support to the quest for autonomy and that they are simply awaiting the same to be calendared for committee and plenary debates for them to vote in favor of its immediate passage.

For his part, Mountain Province Rep. Maximo Dalog, Jr. also expressed his desire that president Duterte will already include in his upcoming SONA his support to the region’s quest for autonomy so that his fellow lawmakers will be convinced to immediately pass upon the matter both in the committee and plenary levels to allow the region to embrace autonomy before the Chief Executive will step down from power in June 2022.

Dalog pointed out that the Regional Development Council (RDC) in partnership with concerned local governments, the private sector and concerned stakeholders were already able to sustain the grassroots support to autonomy, thus, the realization of the put up of the ARC will be the President’s legacy to the people of the Cordillera, especially those who risked their lives in the decades of struggle for self-governance.

Last year, all the Cordillera congressmen filed HB 5687 in the House of Representatives while Senator Juan Miguel Zubiri filed SB 1232 in the Senate but the same had never been reported out by the concerned committees where the matters were referred.

The lawmakers asserted that while the constitutional provision mandating the establishment of the Cordillera and Muslim Mindanao still exists, they will not buckle down in fighting for the eventual passage of the proposed law that will establish the desired autonomous region for the benefit of the present and future generation of Cordillerans.