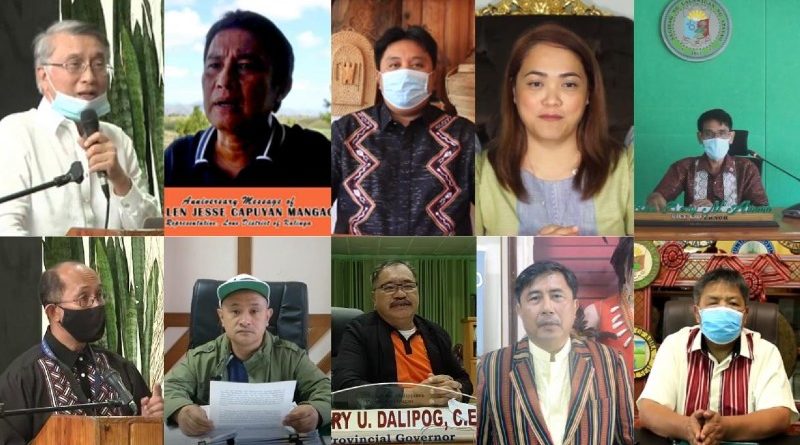 BAGUIO CITY – Despite the COVID-19 pandemic and the restrictions on mass gatherings, the 33rd Founding Anniversary of the Cordillera Administrative Region pushed through virtually last July 15, 2020, with a small onsite gathering at the University of the Philippines Baguio. The event was led by the Cordillera Regional Development Council (RDC) through its Economic Sectoral Committee chaired by the Regional Director Myrna Pablo of the Department of Trade and Industry, and National Economic and Development Authority as secretariat of the RDC.

These leaders declared their support for the establishment of an autonomous region of the Cordillera. They cited enhanced cultural identity, responsive policies for the region, and progress for all, at the forefront of why we fight for regional autonomy.  Mayor Magalong noted that regional autonomy should also be accompanied by good governance, transparency, and genuine leadership.  With this, Governor Lacwasan called on the administration to certify the act establishing the Autonomous Region of the Cordillera, as priority legislation.

The leaders also emphasized unity and collective action as critical, not only in the pursuit of our aspiration for autonomy but for resiliency as well during troubling times such as this COVID-19 pandemic. They further asserted that the crisis has showcased the indigenous Bayanihan culture, unity and cooperation, and displayed the potential for development that can only be realized in an autonomous region. Accordingly, it is through this unity in vision and cooperation that the cry for regional autonomy could be heard at the national level.

Other local government officials joined in on the celebration as well.  In Kalinga, Lubuagan Mayor Charisma Anne Dickpus, Pasil Mayor Alfredo Malannag, Pinukpuk Mayor Irving Dasayon, Rizal  Mayor Karl Baac, and Tinglayan Mayor Sacrament Gumilab, all gave messages in line with the celebration. They highlighted the importance of unity in battling adversities. In Mountain Province, the provincial government together with Congressman Dalog and Governor Lacwasan, held its simultaneous small celebration where government officials participated in the beating of the unity gong. In Abra, notable is the festive participation of Abra’s Sangguniang Panlalawigan who showcased their colorful local abels during the virtual event.