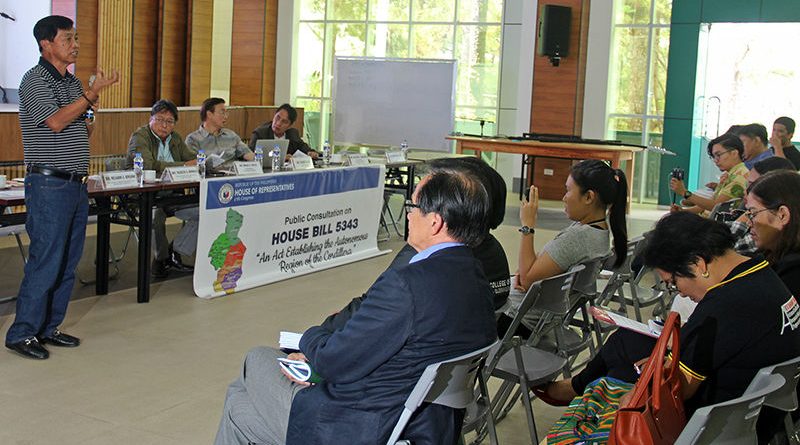 AUTONOMY TOWARDS FEDERALISM  – Mayor Mauricio Domogan explains the provisions of  the proposed House Bill 5343 ” An Act Establishing The   Autonomous Region  Of the Cordillera” during a public consultation which was fully attended by various sectors in the society. Also shown in photo at the presidential table are Benguet Rep.  Ronald Cosalan, Baguio Rep. Marquez Go and Kalinga and  Mountain Province Rep. Allen Jesse Mangaoang and respected humans rights lawyer and University Of Baguio College of Law Dean,   Atty. Pablito Sanidad Sr.- By Bong Cayabyab

BAGUIO CITY  – Cordillera lawmakers and autonomy advocates were elated over the overwhelming support given by the various stakeholders in Baguio and Benguet for the immediate passage of House Bill (H) 5343 or the bill seeking the establishment of the autonomous region in the Cordillera before the planned shift from the current unitary to federal form of government being espoused by the present administration.

Hundreds of barangay officials, line agency and local government representatives, cause-oriented groups, civil society organizations, academe and the youth expressed their support to the region’s renewed quest for autonomy during the initial public consultation conducted by the Cordillera congressmen with the authority of the House committee on local government held at the Benguet Electric Cooperative (BENECO) multipurpose hall along South Drive here Thursday afternoon.

Baguio Rep. Mark O. Go said the overwhelming support of the concerned public and private sectors in Baguio and Benguet was a good start for the series of public consultations that will be done regionwide before Congress resumes sessions next month after their Holy Week break so that Cordillera congressmen will be able to report to the leadership of the House committee on local government the need to include the bill for committee deliberations, referral to the House committee on appropriations and committee on rules prior to the plenary debates.

Go said lawmakers are targeting the enactment of the proposed autonomy bill either before their adjournment synergy or before the scheduled filing of the certificates of candidacy for the May 2019 mid-term elections which will be scheduled in October.

“We hope we could be able to beat our prescribed deadline so that we will be able to move on for the conduct of the information education campaign on the contents of the autonomy bill and the plebiscite for its ratification by the people,” Go stressed.

Benguet Rep. Ronald M. Cosalan said it is important for Cordillerans to be united towards a common position which should be autonomy first towards federalism because the planned shift to federal form of government might take a little more time while the region’s renewed quest for autonomy has its constitutional basis.

Cosalan pointed out that by singing the same tune, Malacañang officials will have no reason not to support the enactment of the autonomy law and eventually certify it as an urgent administration measure so that their fellow lawmakers will have the guts to pass it in the House of Representatives.

“We hope that President Rodrigo Duterte will still issue the awaited certification to keep the bill moving in both chambers of Congress,” Cosalan stated.

Kalinga Rep. and Mountain Province caretaker congressman Allen Jesse C. Mangaoang the initial results of the public consultation in Baguio and Benguet should serve as the benchmark in the upcoming consultations to be undertaken by the congressmen in the different parts of the region in the next several weeks so that they will be able to make representations with their fellow congressmen to consider prioritizing the passage of the proposed autonomy law side by side with the Bangsamoro Basic Law (BBL).

Mangaoang added the reason why the Cordillera congressmen took the initiative of conducting the public consultations in their areas of jurisdiction is to continue gathering the sentiments of the people on how to further improve the provisions of the bill so that it will be able to effectively and efficiently address whatever will be the projected problems once the autonomous region will be in place.

“We are elated that we were authorized by the leadership of the House committee on local government to conduct the public consultations for HB 5343 considering that we are familiar with the situation and the issues concerning the clamor for regional autonomy so that the region will have a better leverage in lobbying for its existence as an autonomous region within a federal state or become an independent federal state once federalism will be in place,” Mangaoang said.

Mayor Mauricio G. Domogan said Cordillerans are supportive of the administration’s planned shift to federal form of government but equally important is the region’s clamor for autonomy towards federalism for the region not to be left out in case their will be potential realignments when the country will be divided into federal states.

While the present administration has not yet finalized the mode of federalism that should be adopted, Domogan asserted that Cordillerans must take advantage of the present environment where the administration is supportive of the clamor for autonomy in the region so that there will be a good chance for the region to be united and intact once federalism will be in place.

The chairman of the Regional Development Council (RDC) and the Regional Peace and Order Council (RPOC) explained that once federalism will be in place prior to autonomy, there will be a greater chance for the local governments in the region to be mixed up with the much bigger and heavily populated provinces in Northern Luzon which will again result to the marginalization of Cordillerans as the proposed center of the Northern Luzon State will be in Tuguegarao City, Cagayan.

He emphasized it is still important for the proposed Organic Act to be acted upon by Congress similar to what is being done to the BBL because the two proposed laws trace their basis to the 1987 Constitution which mandates the establishment of autonomous regions in Muslim Mindanao and the Cordillera, thus, the need for the two proposed measures to be discussed side by side with each other.

Numerous position papers strongly supporting the immediate enactment of the proposed autonomy law were submitted by the different public and private sector organizations who were present in the public consultation that was organized to drum beat the discussion of autonomy among the people for them to be clarified on their doubts regarding the establishment of an autonomous region in the Cordillera.