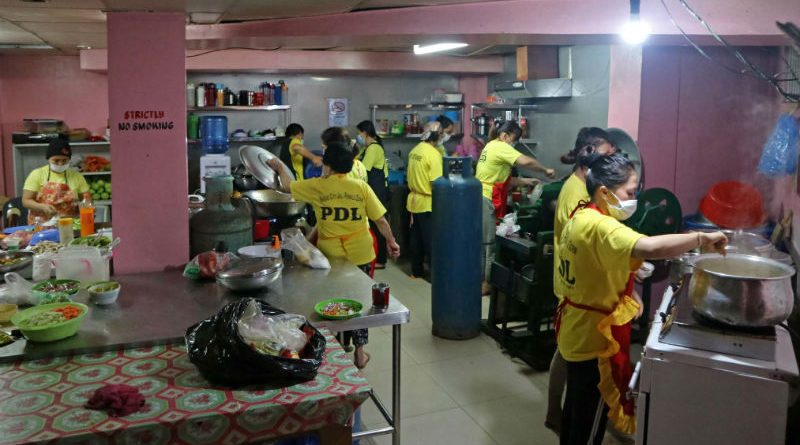 BAGUIO CITY  – Officers and persons deprived of liberty (PDLs)  of the Baguio City Jail female dorm conducted a cookfest among themselves as their way of celebrating Independence Day and Father’s Day Wednesday afternoon.

Jail Chief Inspector April Rose Ayangwa, warden of the female dorm, said that the persons deprived of liberty in the 5 rooms of the facility were given P1,000 each room as their budget which they will use to purchase the ingredients of their desired viand that will be served in celebration of the twin activities in June.

“The conduct of the cookfest is our own simple way of recognizing the fathers in our facility because they will be surely with their families during the celebration of Father’s Day on Sunday,” Ayangwa stressed.

The PDLs in each of the rooms were allowed to discuss among themselves what viand to cook with the provided budget and were given sufficient time to cook the same before these were subjected to judging and eventually served as their dinner during the twin celebrations sponsored by Paracelis Mayor-elect Dr. Marcos Ayangwa.

Further, the jail management also gave tokens to the fathers of the facility as their advance gifts in time for the celebration of Father’s Day on Sunday.

The jail official expressed her appreciation to the PDLs for their cooperation and active participation in the cookfest which will be replicated in the coming months because of its success.

The Muslim dish ‘piyaparan’ made of chicken cooked in ginger, coconut oil and spices was adjudged as the winning cookfest dish.

From a high of over 120 PDLs previously detained in the facility, Ayangwa disclosed that the number of PDLs decreased to 81 because of the continuous decongestion being done by the jail management in coordination with the city prosecutor’s office, the courts where their cases are pending and their lawyers.

According to her, the good conduct time allowance of each of the PDLs will greatly help in the reduction of the number of years of their stay in the jail facility, especially when their sentences are handed down by the courts or if they avail of the plea bargaining, because of the considerable reduction of their incarceration period in the facility to serve their sentence.

Among the reasons for the drastic reduction in the number of PDLs detained in the facility include the posting of bail bond, the dismissal of their cases and their availment of the plea bargaining as mandated under existing laws, rules and regulations.

She said the jail management continues to welcome individuals and groups interested in  extending assistance to the PDLs to make them productive while waiting the decision of the courts on the cases filed against them or serving the sentences handed down by the courts on their cases.

The female dorm is located adjacent to the BHMP male dorm within the complex of the Baguio city Police Office (BCPO).