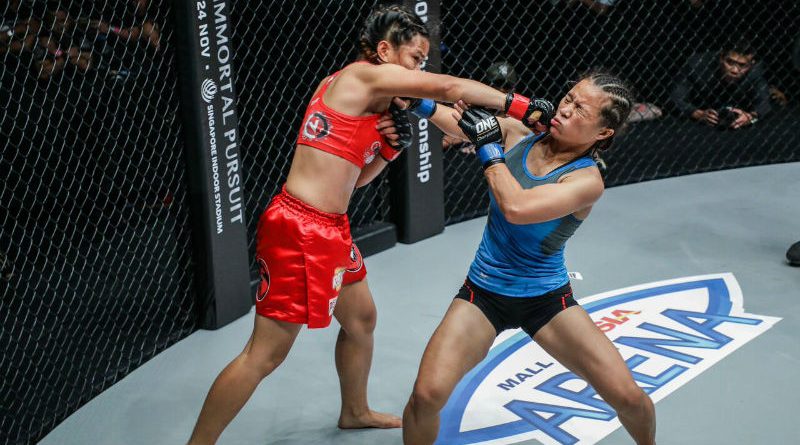 Team Lakay’s Gina “Conviction” Iniong could be setting a record of sorts in ONE Championship history as she is returning inside a one cage to challenge Mei “V.V” Yamaguchi on November 24 after her rousing victory over Priscilla Hertati Lumban Gaol last November 10.

This opportunity came when ONE Championship offered her a chance to replace reigning ONE atomweight world champion, Angela Lee, originally slated to face Yamaguchi in this ONE: IMMORTAL PURSUIT card, when she was forced to withdraw after being injured in a car accident last week .

ONE Championship does not maintain records for the shortest layoff between bouts, but Iniong should be in line to own one of the shortest, if not the shortest one, when she sets her feet in the ring on the 14th day after her last fight.

In the UFC, mmaoddsbreaker.com lists Chas Skelly as the owner of the shortest layoff in modern UFC history, fighting again in just 13 days, followed by Chris Leben and Dustin Pague, both fighting in the 14th day after their last bout.

This will be Iniong’s second time to face Yamaguchi, whom she defeated in PXC43 in March 29, 2014 in Pasig by a split decision. Since that bout, Iniong improved her record by adding three straight victories, two inside a ONE cage, after a loss.

Iniong said beating Yamaguchi three years ago “was like going through the eye of a needle. That bout opened doors of great opportunity for me in this sport.”

Yamaguchi is a 34-year old female atomweight standout and a former ONE world title challenger from Tokyo. She is the DEEP Jewels Featherweight Champion, and owns seven submissions and two knockouts in her 27-bout professional career.

In 2016, Yamaguchi challenged Lee for the inaugural ONE Women’s Atomweight World Championship in an epic showdown that would later win multiple ‘Bout of the Year’ honors from international media publications.

Iniong, a six-time national wushu champion, owns a professional record of 6-2, with four of her six victories coming by thrilling finish, including two highlight-reel submissions and two knockouts.

She is in a two fight winning streak, courtesy of her second round finish of Lumban Gaol in front of a hometown crowd at the mall of Asia during ONE: LEGENDS OF THE WORLD.

“I commend Gina Iniong for taking this match on a short notice. She is a good martial arts artist with promising potential in the division. Gina is in good hands, training with no less than the best at Team Lakay. I have faced her before, and she is always in good condition. As always, I am in tiptop shape for every bout. Brace yourselves for fireworks”, says Yamaguchi of her three-round atomweight bout with Iniong.

For her part, Iniong said she is “expecting a tough duel with Yamaguchi again in Singapore. I have lofty goals in ONE Championship, and I must win this match to achieve them.”