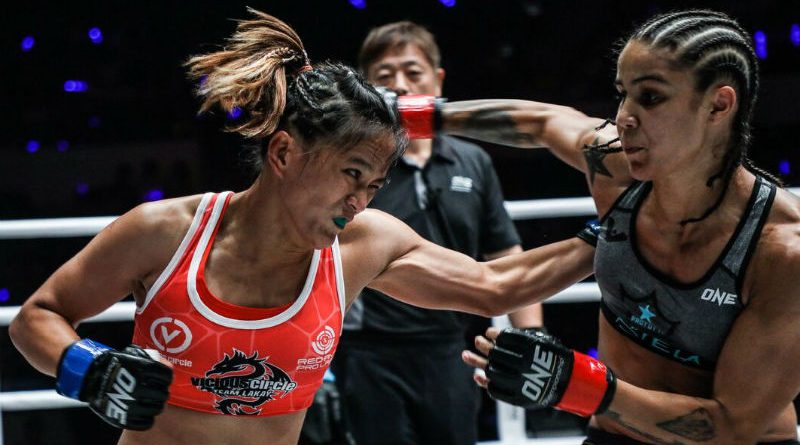 Team Lakay’s Gina “Conviction” Iniong succumbed to a unanimous decision defeat to the hands of Istela Nunes while Filipino-Australian dynamo Reece “Lighting” McLaren and Robin “The Ilonggo” Catalan came up with conflicting wins during ONE: Battle for the Heavens held last night at Guangzhou, China.

The Former two-time Muay Thai world champion and ONE World Title Challenger Nunes made a successful return to ONE Championship after more than a year away from competition in defeating the highly-regarded Iniong.

The 25-year-old Brazilian utilized her length and size advantage to keep Iniong out of range for the majority of the contest, and the “Conviction” had difficulty closing the distance, often over-committing to her opponent’s strikes.

Nunes displayed the brilliant gameplan of utilizing her reach and size right from the start but Iniong got a good break by decking Nunes off a counter punch late first round.

She, however, could not take advantage of the knockdown as Nunes recovered and continued the connecting in the second.

With the same trend happening in the third, Iniong tried to bring the fight to the ground but Nunes defended well against them to keep the contest on their feet.

As it is, Iniong could not contain Nunes’ continuous connection of punches and kicks to yield to unanimous decision los with all three judges in the giving the nod to Nunes.

In the co-main event of the evening, McLaren made his case for a shot at the ONE Flyweight World Championship with resounding clarity, edging out Japanese veteran Tatsumitsu Wada by way of split decision.

Although Wada posed problems on the mat in the opening moments of the bantamweight contest, McLaren’s impeccable grappling was able to pull out all the stops in the last two rounds of the bout, wearing out the Japanese stalwart with powerful takedowns and submission attempts.

In the end, McLaren earned two of the three judges’ nods to have his hand raised by split decision. He improves his record to 12-5 and increased his chances to take a shot at the undisputed ONE Flyweight World title currently in the possession of Geje “Gravity” Eustaquio.

Meanwhile, Robin “The Ilonggo” Catalan provided the best performance by a Filipino in this event.

Catalan and Adrian Mattheis kicked off the night in a battle of strawweights.

“The Ilonggo” displayed viscous control of the action as he utilized his superior grappling skills right in the opening round.

Catalan saw an opening and capitalized on it as he executed a WWE-type slam, hoisting Mattheis into the air through the hip and dropping him down to the canvas where he kept his Indonesian adversary on the defensive for the rest of the frame.

In the second, Catalan caught a kick from Mattheis and brought him back down to the mat again via another slam. He constantly threw ground and pound fists and elbows to Matthies until he pounced one of his undefended legs to execute a heel hook that forced Matthies to call it quits at 2:10 in the frame.

Catalan inproves his professional record to 8-3 and is now on a two-bout win streak.

In the main event of the evening, 23-year-old “Killer Bee” Kai Ting Chuang of Chinese Taipei put on the performance of a lifetime, upsetting heavy favorite Yodcherry Sityodtong of Thailand in a five-round ONE Super Series Kickboxing title tilt.

El Bouni patiently waited for the right moment to pounce on his hard-hitting counterpart. When he saw a good opening to strike, El Bouni dropped Meunier to the canvas with a thunderous hook.

Although Meunier was able to beat the count of ten, El Bouni knew that the finish was within his reach, prompting him to produce another huge knockdown that put his Australian opponent on the mat for good. His stellar conquest of Meunier earned him the GoDaddy Knockout of the Night.

Showcasing his versatility in his maiden assignment as a ONE Athlete, Fu flustered Yensebayev with pinpoint striking before he vindictively took matters to the ground. On the mat, Fu ferociously secured the finish, blasting his Kazakh foe with a relentless barrage of heavy blows that forced referee Yuji Shimada to intervene and call a halt to the contest.

In a ONE Super Series Muay Thai bantamweight bout, Saemapetch of the world-renowned Fairtex gym in Pattaya, Thailand put on an incredible striking showcase, dominating opponent Deividas Danyla of Lithuania over the course of three whole rounds.

Operating behind the southpaw stance, Saemapetch cracked Danyla with whipping left roundhouse kicks and slashing left elbows throughout the duration of the bout. In the end, all three judges scored the bout in favor of Saemapetch to win by unanimous decision.

After tasting his first setback in ONE Championship last March, Zhao Zhi Kang of China redeemed himself by defeating compatriot and promotional debutant Ma Xu Dong.

Although he went through a rough start at the hands of Ma, Zhao clung onto his submission wizardry, which paid dividends in the third and final round. Zhao put Ma to sleep with a tight guillotine choke to earn the victory.

25-year-old Shuya “Stealth” Kamikubo of Japan made a successful ONE Championship debut, overpowering martial arts veteran “The Terminator” Sunoto of Indonesia with a masterful grappling performance.

After softening up Sunoto with ground-and-pound for the majority of the contest, Kamikubo put the finishing touches in the second round, pouncing on Sunoto with punches from top to win by technical knockout.

After trading kicks at the center of the ONE Championship ring, the two began to trade punches. Although he was swapping hard blows with a highly-decorated boxer, it did not deter Peng, who caught Kalai with an overhand right that dropped the Indonesian instantly.

Follow-up punches on the ground ended matters just under a minute into the contest, earning Peng the stoppage victory.

Official results for ONE: BATTLE FOR THE HEAVENS

Bantamweight bout: Shuya Kamikubo defeats Sunoto by TKO (Strikes) at 3:54 minutes of round 2