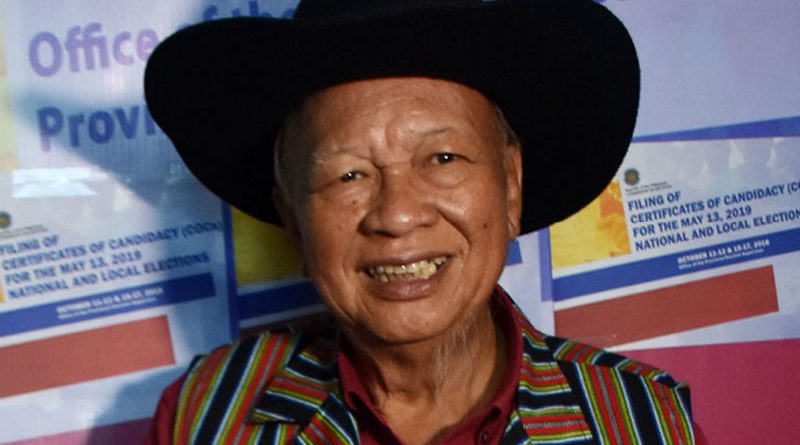 LA TRINIDAD, Benguet – Benguet Caretaker Congressman and Anti-Crime and Terrorism through Community Involvement and Support (ACT-CIS) Party-list Rep. Eric Go Yap took time out from his busy schedule both in the House of Representatives and in the province to pay tribute to the late Rep. Nestor B. Fongwan, Sr. for his good deeds as an accomplished public servant having occupied various positions in the province over the past three decades.

During a tribute to members of the 18th Congress who passed away since last year but were not accorded the necessary rites because of the prevailing pandemic, Yap, who chairs the powerful House Committee on Appropriations, stated that he came to know about the late Fongwan’s good deeds and accomplishments when he started his work as the appointed caretaker of the province early this year.

He assured the Fongwan family and their supporters that he will do his best to serve the greater interest of Benguet and that he will try to replicate or even exceed the former lawmaker’s accomplishments as the province’s dedicated action man.

Yap was appointed as the province’s caretaker congressman by former House Speaker Allan Peter Cayetano on January 20, 2020 and was immediately accorded by the provincial government with a simple welcome program at the Wangal Sports Complex on January 29, 2020.

Fongwan succumbed to a lingering illness on December 18, 2019 after being elected as the province’s representative during the May 2019 mid-term national and local elections.

Congressman Yap assured he will reciprocate the warm welcome, respect and support accorded to him by the people of Benguet in his short stint as the province’s legislative caretaker with utmost dedication to render genuine public service to ensure that the residents will be provided with basic services by the government through the government agencies.

Congressman Yap disclosed he will continue to work with the barangay, municipal and provincial officials, as well as stakeholders, to full fill the dreams and aspirations of former Congressman Fongwan to bring Benguet to greater heights.

He expressed his gratitude to the Fongwan family for choosing him to give his message before members of the House of Representatives and the family members and relatives of several deceased lawmakers, including former Congressman Fongwan, during the aforesaid occasion held through virtual in the halls of Congress.

Yap added he learned to love the people of Benguet because they are peace-loving citizens and the province as a whole because of its scenic spots worthy of being aggressively promoted as ecotourism destinations and the well-preserved culture and traditions of the indigenous peoples.

Yap rallied all sectors of the province to continue working for the growth and development of Benguet and the former Congressman Fongwan would have been surely happy to see how people strive for excellence even during the ongoing pandemic that had significantly compromised the employment of most residents, as well as the economic activities that provide income for both the formal and informal sectors of society.

This post has already been read 17600 times!…if they played under 1998 rules and style. Sorry, Draymond Green. Yeah, you