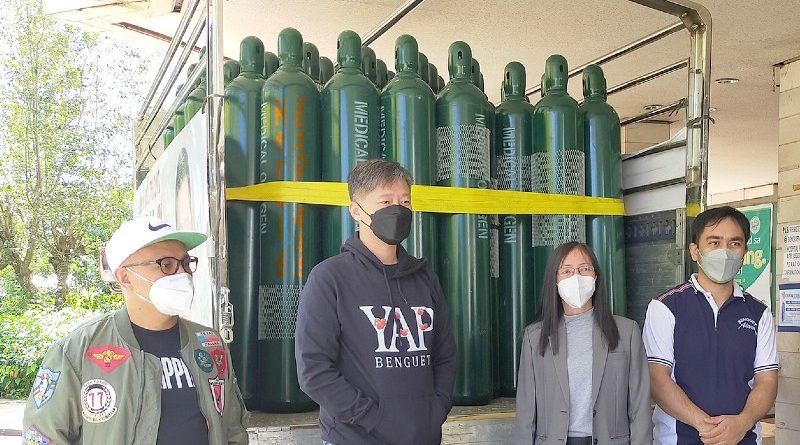 LA TRINIDAD, Benguet – Benguet Caretaker Congressman and Anti-Crime and Terrorism through Community Involvement and Support (ACT-CIS) Party-list Rep. Eric Yap started providing the Benguet General Hospital (BeGH) and other district hospitals in the province with a supply of oxygen to address the inadequate supply of oxygen needed by Coronavirus Disease 2019 (COVID-19) patients recovering from the deadly virus.

Yap, who chairs the powerful House Committee on Appropriations, personally handed over to BeGH officials the initial 100 tanks of oxygen to be used by the hospital for the oxygen requirements of the increasing number of COVID-19 and other patients wanting to recover from their illnesses.

He disclosed that the initial tanks that were delivered is part of the 500 tanks of oxygen he committed to provide the BeGH and other district hospitals to sustain the availability of oxygen for their respective patients.

Congressman Yap claimed that by next week, another 100 fully loaded oxygen tanks will be delivered to the province where the same will be equitably distributed to the 5 district hospitals where each of the hospitals will be having their initial supply of 20 oxygen tanks.

The lawmaker added that the refill of the oxygen tanks could be done by existing suppliers in Baguio City and Pangasinan and that what will be done by the hospitals is to simply bring to the suppliers the empty tanks to be refilled to sustain the availability of oxygen supply in the health facilities.

According to him, the expenses that will be incurred in the purchase of the oxygen tanks and refilling of the same will be charged to his personal resources because suppliers nowadays want that the payment be done in cash and that the same is not allowed in established government procurement processes and procedures.

Congressman Yap assured that the refilling of the oxygen tanks will be done weekly for as long as the emerging threat of the deadly virus will be present in the midst so that the people will be able to benefit from the availability of oxygen in the different health facilities to be able to recover from their illnesses.

He pointed out that administrators of the district hospitals in Kapangan and Buguias already informed him of their need for steady supply of oxygen to cater to the increasing demand from patients for oxygen that is why he will be allocating the next wave of fully loaded oxygen tanks that will be delivered to the province through his own initiative and coordination with the proper authorities.

The 100 oxygen tanks for BeGH were turned over by Congressman Yap to health authorities in the presence of Gov. Melchor Diclas and Vice Governor Johnny Waguis who attended the simple rites that were organized for the purpose.

This post has already been read 2267 times!The  Persons with Disabilities Affairs Office (PDAO) is urging persons with disabilities in