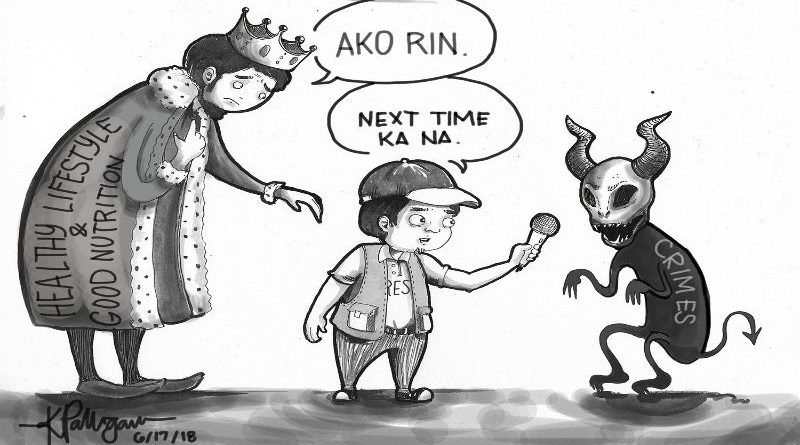 Healthy lifestyle and good nutrition are two of the less publicized programs of government agencies and local governments. These are among the least budgeted programs also probably because politicians do not see them as popular issues that can bring in votes. ‘Health is wealth’ is an old adage that both speaks well of what healthy people can bring and contribute to the overall development of a community and at the same time, personally save them from time and resources spent on health issues. Good nutrition is a component of healthy lifestyle as eating the right kind of food keeps people healthy. Surely,  eating the wrong kind of food can surely result to some illnesses which makes us unproductive.

Our ancestors ate whole foods, unrefined, no artificial additives, unprocessed as much as possible, and surely organically grown. These, coupled with physically active and less-stressful lifestyles supported their health. Health advocates are now trying to reclaim these healthy foods, some of which the world has lost, including the species/varieties and knowledge that went with them. We can find here our rootcrops, leafy vegetables, whole grains, and other organically-raised food, which kept our relatives well into their 80s,  90s, with a good number of them even overshooting the century age. People who grew up in the rural areas were used to eating organically-raised food that kept them away from dreaded illnesses and allowed them to be productive in life. However, modernisation and the search for cash sources of livelihood in the urban centers and urbanised areas introduced people to processed food, fastfood, use of chemical preservatives to prolong the lifespan of perishable goods, less physically active lifestyles, and pollution,  among others,  which has reversed our health, with parents seeing their children sick at early ages than them. The quest for better paying jobs locally and overseas has changed the lifestyle of many people affecting the life expectancy of the populace. The adoption of technologies also allowed most of our people to abandon the traditional way of life which exposed them to tremendous threats in their lives, even affecting the routine of children at a very young age.

Because of the latest developments locally and globally, the government, in collaboration with international health organizations, embarked on an aggressive campaign to promote healthy lifestyle and good nutrition among all ages with the use of the multi-media approach, combining traditional and social media approaches, with the primary aim of awakening the people into realizing the importance of revisiting our current lifestyles. Health experts are alarmed at the continuous increase in the so-called lifestyle-related illnesses, such as cancer and cardio-vascular diseases, which are now among the top causes of morbidity in the country for over a decade now. The acquisition of the lifestyle-related diseases could be attributed to the lack of exercise, improper diet and wrong attitude towards eating the right kind of food. However, we must also remember that healthy lifestyle can only thrive on a healthy environment, both physically and psychologically.

There is a growing awareness among informed individuals embracing healthy living. We can see the efforts at urban gardening to support household needs for organically-produced vegetables and fruits, at the least. However, there are more people who refuse to adopt the widely promoted healthy lifestyle and good nutrition being advocated by government agencies, like the Department of Health (DOH) and its attached agency, the National Nutrition Council (NNC).

Under existing laws, July has been designated Nutrition Month to remind our people the value of proper nutrition and to prioritize the needed adjustments in their daily diet to avoid developing dreaded illnesses. Ironically, developmental news items on good nutrition and healthy lifestyle do not hit the headlines but land as news briefs in the inside pages or not published at all because these news items do not actually sell compared to the crime and corruption incidents that tickle the minds of the readers. Worst, the items are not even given the appropriate treatment by news organizations unless provided the required budget for advertorials.

We believe the media owes it to the public to publish these as news to be printed or broadcasted as a matter of right to information for readers. Media practitioners are also public servants who must provide our people with the right information, one of which are government efforts on healthy lifestyle and good nutrition. Media must assume responsibility in building public awareness on healthy lifestyles and good nutrition considering that the said issues are endowed with public service that matters to the lives of the ordinary people.

It is high time for media to become the aggressive in changing the living condition of the people by providing them the right information on healthy lifestyles and good nutrition. Let us take it upon ourselves to advocate for it because we want to live healthy lives and enjoy God’s gifts longer.