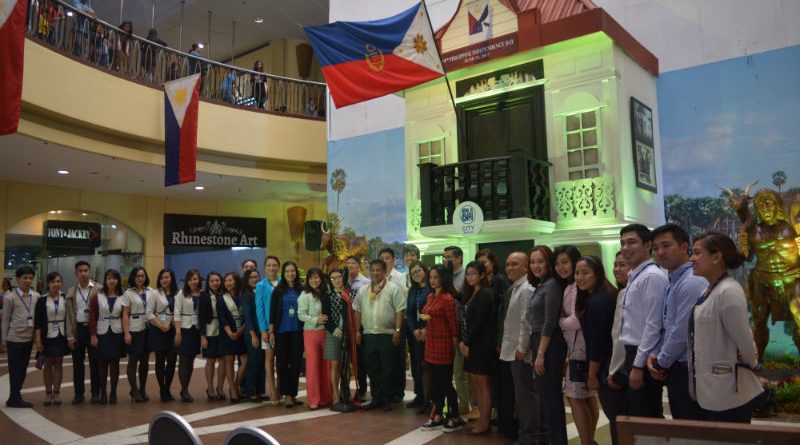 The Centennial Commemorative Flag was first shown to the public during the centennial celebrations of our Philippine Independence in 1998 and has since been kept in the Emilio Aguinaldo Museum in Baguio City, repository of the 1st Philippine Flag — the same place where the original 1st Philippine Flag of 1898, in its frayed glory, is being put on limited display.

This is the first time the flag will be displayed in public outside of its home, the Aguinaldo Museum. The flag bears the same design and details as those in the 1st Philippine Flag including the gold thread-embroidered words “libertad, justicia, yqualidad” and “fuerzas expeditionarias del norte.”

In 1998, the General Emilio Aguinaldo Foundation, Inc., commissioned the University of the Philippines through the late Dean Lydia Arribas and her team in 1998 to examine, study and replicate our beloved 1st Philippine Flag of 1898.

The structure in which it is being displayed is a replica of the famous Aguinaldo house in Kawit, Cavite, the first site where the original flag was raised in proclamation of the sovereignty and independence of the Philippine Islands from the colonial rule of Spain.

119 years ago on May 1898, somewhere in a house in Hong Kong, a 28-year old man roughly 4 feet 11 inches in stature, handed the designs of a beautiful unique flag he had made to a pretty young lady.

The man was Asia’s most successful revolutionary leader, Emilio Aguinaldo y Famy, the lady, Marcela Agoncillo, and the flag was the 1st Philipine Flag.She was made just slightly over 3 days but she was arguably the most beautiful and symbolic flag the world has ever seen.

Prominent among the features of the 1st Philippine flag were:  a sun with face symbolizing the unconquerable spirit of the of the young, Filipino nation and they’re subscription to its powerful and long lasting existence, Eight rays, in honor of the 8 provinces that first revolted against Spain, 3 stars, representing the major island groups of the young Philippine nation, Luzon, Visayas, and Mindanao, a rectangular top colored blue symbolizing the nation’s desire for peace and its nobility, a rectangular bottom colored red symbolizing the nation’s courage and bravery against all odds, a triangular white symbolizing the aspiration of liberty and the purity of its ideals.

In addition, one of the most unique features of this flag was it could be hung with the red portion on top in times of war. The Flag arrived in the Philippines sometime around May 10 with General Emilio

Aguinaldo. Shortly thereafter it would be waived in victory by General Aguinaldo himself in the battle of Alapan on May 28, 1898.

15 days later, President Emilio Aguinaldo would raise the very same flag in Kawit Cavite as the young Filipino nation declared its independence to the whole world. A few months later on January 23, 1899 in Malolos Bulacan, the flag would be the centerpiece during the inauguration of Asia’s First Democratic and Constitutional Republic, the First Repulblic of the Philippines.

After war officially broke out between the Philippines and the United States of America, the flag would accompany the Philippine Revolutionary forces under the overall command of President General Emilio Aguinaldo.

She travelled up north of the island of Luzon through the provinces of Bulacan, Pampanga, Nueva Ecija, Tarlac, Pangasinan, La Union, Ilocos Sur, Ilocos Norte, the Mountain Province, Benguet, Cagayan, and finally Isabela.She was hidden from the public and banned from display together with all Philippine flags from 1907 to 1919.

She was paraded and hoisted during the restoration of Philippine Independence in 1946.She was once again hidden and kept in a secret place during Martial Law.She has found a home at the Aguinaldo Museum where she is on limited display and protected against the slow but sure ravages of time. (source: General Emilio Aguinaldo Museum)

This post has already been read 444 times!TABUK CITY, Kalinga – With the voter’s registration extended, the Commission on Elections