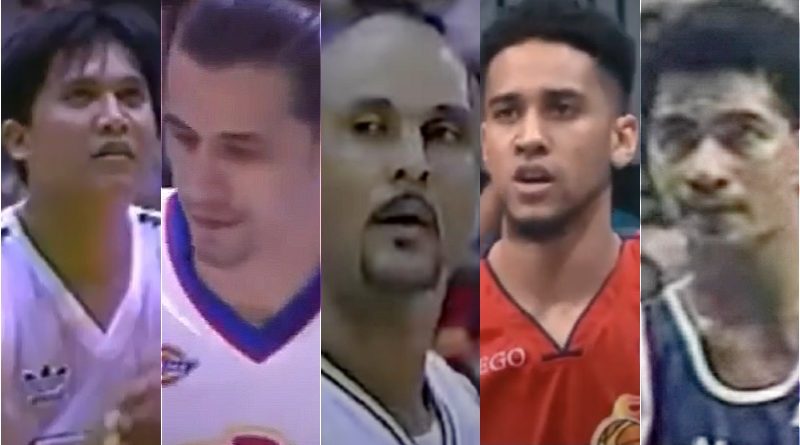 Last time, I tried assembling a PBA team that could take any comers from all PBA players in their primes at my disposal.

That them was assembled with the consideration that they were two-way players. both defend and make baskets.

This week, the fantasy game I attempt to do is aptly related to a term these days, that which can play tough defense and lockdown any team in any era in the PBA.

Like last time, let’s be realistic in this game and agree that putting in just any five former Defensive Players of the year in the team wouldn’t work. We have to put in guys who can play and guard the normal positions in the game because we are to assume, they will also be on the offensive side at points of the game.

Remember, the aim of this team is to stop the other team from scoring.

The “Defense Minister” would lead my troops as the main paint protector.

I like Codiñera as my center for any era because he has proven his ability to stop guys even bigger than him from offensively dominating the paint in the past. He did this to mobile big guys as well.

He proved to be the most reliable import stopper during his time and is mobile enough to cover a man in case there are switches in defensive assignments as the PBA have today.

Codiñera is the leader of all-time nominations to the all-defensive team with ten earned throughout his career, including being named the 1994 PBA Defensive Player of the Year. He is also a member of the 2,000 defensive rebounds club.

Truth to be told, all five Purefoods franchise championships won when he was with the team may not have been a reality without him and his defense.

He is the underrated half of his partnership with Alvin Patrimonio because his being the wall between the opposition and their basket is not often given proper recognition given the four-time MVP’s more significant overall impact to the franchise.

The “Pinoy Sakuragi” would perfectly compliment Codiñera because of his similar mobility and ability to cover both fast and strong big guys.

Both these big men will not be left behind whenever there will be switches in defense.

Moreover, while reportedly standing only 6’4”, Pingris has been an effective and efficient undersized center compared to other giants but he defending bigger guys, gets rebounds against them, and still score in the paint despite it.

His play for Gilas Pilipinas during their FIBA World Cup run proved he can hold his own against the giants of Asia and the world.

His 8 nominations is tied for second in the all-time list.

Next to be drafted to my team would be the defender who can shot down the other team’s scorer, usually the guard or swingman, and that would be Norwood.

I believe there is little argument here because Norwood has proven both in the PBA and in international competitions his defensive prowess in limiting or stopping the opposing team’s scorer.

This guy can effectively shut down any of the teams guards or small forwards.

Norwood is the 2010 PBA Defensive Player of the Year. He already has 7 All-Defensive Team nominations and he would probably add more until he retires.

He would also probably play point for my team.

Then I would draft the ultimate “jack of all trades” of defense, “Stonewall Jackson” and slot him in the three position.

He is the only guy in PBA history who can guard all positions, 1-5, and come up with scintillating results.

He would be best remembered for handcuffing Tanduay Rhum’s deadly pair of Sonny Alvarado and Eric Menk during the 1989 All-Filipino championship. His defense is pivotal for Shell winning that title.

The only probable question is can he adapt to be fast-paced of today.

While today’s game is faster that when he was playing, I believe he can still stick to his man because he did had lots of instances in limiting faster, quick point and off guards during his time with Shell in the 1990s.

Last but not the least would be the guy who can stick to the other point guard and distract the opposing team’s play and can an option at point given Norwood’s playing an unfamiliar territory of distributing the ball.

Enter: Capacio, the eight-time All-Defensive Team nominee. He is 6’1”, a tall guard in the PBA standards.

Another unheralded component of the Purefoods squad in the early 1990s, he would often be assigned to shackle eilite guards like San Miguel’s Hector Calma, Renato Agustin, and Ricardo Brown or Ginebra’s Robert Jaworski, Sr., Rudy Distrito, and Joey Loyzaga, among others.

(1) I would like an option to make the team able to cope a real fast, quick opponent so I would pick the original “Tapal King”.

Cezar is standing only 6’3” but has long arms and is experienced in dealing with big guys in the middle including imports with his famous “umbrella-like” defense and two-handed shot-blocks.

Also known as “The Scholar”, he has the ability run the floor and finish fastbreaks that would also serve him well on the defensive end against fast-paced teams.

Cezar, a natural power forward, has only 4 Defensive Team nominations but one has to remember, the PBA only started giving this award starting 1985, ten years after Cezar had been already plying his trade in the league.

(2) I’d like an option in reverse, to make the team stop larger but slower opponents so I would roster “The Dynamite”.

Loyzaga is Ginebra’s main defensive guy to stop opposing scorers including imports despite standing only 6’2”.

In fact, Loyzaga’s claim to defensive fame was his performance for the Philippine National Basketball team during the 1990 Asian Games where he help limit North Korean center Ri Myung Hun, who stands 7’8.5”, a discrepancy of over 1 foot and 4.5 inches.

His only suspect is his speed and would perfectly replace Capacio in the starting unit if a tall and slow opponent is faced.

(3) I’d consider bringing in a smaller but quicker guard in case the team faces an opponent full of quick shooters like the Koreans.

He actually was nominated five times to the All-Defensive Team and is the all-time leader in career steals.

My team is really undersized so I want a taller import for the foreigner-reinforced conferences. I couldn’t think of a better import at defending the paint and mobile enough to adapt today’s fast paced game than Davis.

This dreadlocks-wearing guy doesn’t really score much and was still effective when deferring the scoring cudgels to Abarrientos, Jojo Lastimosa, and Kenneth Duremdes for the Alaska Milk team during the Commissioner’s Cup.

He may have played only two conferences in the PBA but his blending well with the Alaska squad to a championship during the 1998 Commissioner’s Cup despite not dominating the scoring side in his only stint is more than enough proof of improving the team on the defensive end.

It should be noted that the Milkmen actually had grand slam hopes that year which was only thwarted probably because the core of that team missed the last conference to participate in the Asian Games,

This 6’7” center won the Best Import award while averaging 11 rebounds during his championship run. He still led the team to a third place finish in the other.