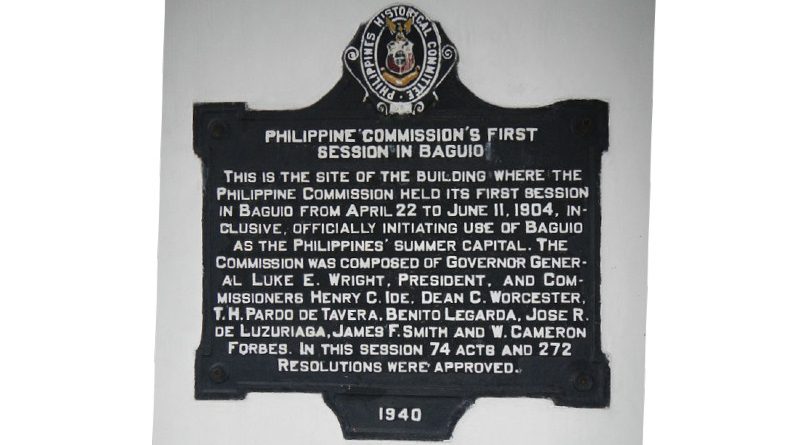 City officials urged the City General Services Office (GSO) to conduct regular site clean-up at the historical landmark of the first Philippine Commission and to carry out the removal of wires, eyesore cables and other obstructions in the area.

Further, Resolution No. 171, series of 2021 that was signed by Mayor Benjamin b. Magalong tasked the City Planning and Development Office (CPDO) and the City Buildings and Architecture Office (CBAO) to introduce site inspection plan pursuant to the pertinent provisions of Republic Act (RA) No. 10066 or the law that prescribes for the protection and conservation of the national cultural heritage and other related laws.

Under the aforesaid resolution, local legislators stated that the present state of the historical marker at the first Philippine Commission is not and will never be a good way of projecting the greatness of the city and its creative people, thus, there is a need to take the high role to protect, preserve and conserve all historical landmarks and sites in the different parts of the city.

The council pointed out that it is the policy of the State to protect, conserve, develop, promote and popularize the national’s historical and cultural heritage and resources as well as artistic creations as the same serve as its pride.

According to the body, historical markets underscore the significance of rich local history highlighting important events, remarkable persons, significant structures and institutions in Philippine national and local histories and can call attention to historical preservation efforts and initiatives.

The first session of the Philippine Commission was held in Baguio City from April 22, 1904 to June 11, 1904. It was also the first time that Baguio City was hailed and conferred as the country’s Summer Capital that remains to date.

The council pointed out that the historic session of the first Philippine Commission was held at what is now known as the Baden Powell hall along Gov. Pack Road where the historical market has been installed to indicate that something significant in the history of the city happened in the said area.

The body emphasized that the present condition of the established historical marker does not correctly depict its true value and social significance as a historical landmark due to being allegedly unattended, untidy and unsafeguarded, thus, the need for the concerned offices of the local government to act on the aforesaid matter and bring back the significance of the historical marker that has been put in place in the area.

The council stipulated that similar site clean-ups should be immediately done in other similarly situated historical markers that were previously installed in the different parts of the city so that the sanctity of such markers will be restored for residents and visitors to appreciate.

Moreover, the concerned offices were tasked to conduct an ocular inspection on the state of the installed historical markers and for the same to have a complete inventory of the said markers to serve as reference of decision makers and policy makers in what further initiatives to undertake for the betterment of such markers to highlight the significance of the said markers to the rich culture, heritage and history of the city tracing back to the olden times. By Dexter A. See